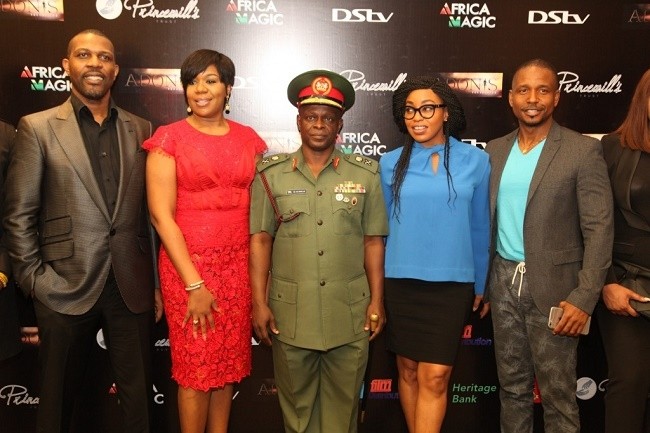 Forty years after the Ni­gerian Civil War, 1976, a movie on the crisis, hit the entertainment industry on Sunday night.

The streets of Nollywood were lit up with the movers and shakers of the industry attending the first private screening of the Prince Tonye Princewill’s movie production.

A statement signed by Princewill’s personal assistant on media and publicity, Wabiye Idoniboye-obu, said that the Private screening was the first time the cast and crew alongside leaders of the business community, saw the finished product of six years of intense work.

According to the statement, the satisfaction of the viewers, was glaring as the movie brought tears to everyone in the hall including one of the star acts, Rita Dominic.

Set six years after the Nigerian civil war, ’76’ tells the story of a young military officer from Nigeria’s Middle Belt region who got entangled in a romantic relationship and eventually married a beautiful student from the South-Eastern part of Nigeria. Their budding romance is threatened by endless military postings, and they face the ultimate test when news of the soldier’s involvement in a botched coup attempt hits the headlines.‎

Directed by award winning director, Izu Ojukwu, 76 is inspired by events which led up to and followed the botched 1976 coup d’etat, and features real life, archived, actual footage that contributes to the movie’s overall authenticity. The execution of the movie was also done with the explicit approval and support from the Nigerian Army.

In his description, the director of the movie, Izu Ojukwu said the movie is as a tale of love in a time post war. “The movie deals with a range of issues including the plight of the African woman, and the usually invisible pain of a soldier’s wife.

“76 highlights the enduring Nigerian cultural values of courage, resilience, patience, loyalty, faith and family and the nation’s ability to surmount all challenges,” he said.

The release of 76 comes four decades to the date after the actual events, and follows several years of work by the director and the production duo of Adonis Productions and Princewill’s Trust. 76 stars renowned Nollywood names including Rita Dominic, Ramsey Nouah, Chidi Mokeme, Ibinabo Fiberesinma, Memry Savanhu, Ada Ofoegbu, Daniel K. Daniel and a host of others.

On his part, the Executive Producer and a patron of the Nigerian Association of Movie Producers, Prince Tonye T.J.T Princewill, said: “76 is a deeply emotional movie, and it resonated deeply with me as I am sure it will do for viewers not just in Nigeria, but around the world.

“The movie’s message presents a number of questions including how we got here, amongst many other issues. 76 is the first movie to be shot on film and was thus a very expensive project. We are however very satisfied with the finished work and we know viewers will thoroughly enjoy the experience.”

Thanking the Nigerian Army, M-Net and other sponsors for their support, Princewill added: “None of this would be possible without the support we have received and continue to receive. The cast and crew have been phenomenal, and they gave their all to make this movie the success that it is. I’d also like to thank my partners Adonis Production led by Adonijah for showing me one of the most powerful ways to touch lives – by making movies.”

76 premieres in 2016 in cinemas across the world starting in Nigeria, thereafter it will hopefully come to TV screens across the continent courtesy of DSTv Box office, Netflix & MNET/Africa Magic.

Speaking on the Nigerian Army’s involvement in the movie, the Head Civil-Military Affairs Army Head Quarters, Major General Nicholas Rogers, representing the Chief of Army staff said “inevitably a lot has changed since 1976. As the world has evolved, so have we,”

“The relationship between the army and the people is now even more critical. Our true strength comes from collaboration, and nowhere is it better illustrated than in partnerships such as these.”

He also reiterated the commitment of the Nigerian Army Leadership to anything positive that tells their true story.‎

2023: Boost For Obi-Datti As Court Compels INEC To List Candidates In 24 States For Elections