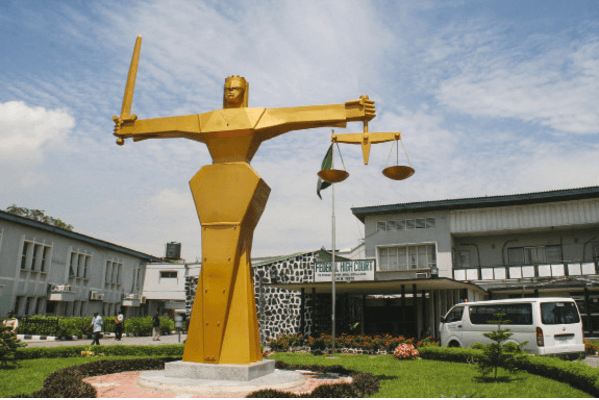 Justice Mohammed Liman ordered the remand of the defendants at a custodial centre after their arraignment on a seven-count charge of fraud preferred by the Economic and Financial Crimes Commission (EFCC).

The defendants are charged alongside one Prince Isaac Okpala described as deceased.

They were alleged to have committed the offences between 1994 and 2007.

The anti-graft agency alleged that they fraudulently procured a Barclays Bank cheque for 2.556 billion pounds made payable to Gladstone Kukoyi and Associates on the pretext that it was meant for the construction of three refineries and petrochemical complex in Nigeria.

They were also alleged to have, sometime in April 2007, altered a statement of account in the name of Goldmatic Ltd., purportedly issued by the Central Bank of Nigeria (CBN), falsely claiming that the CBN had in its custody 2,159, 221, 313.54 pounds in favour of Goldmatics Ltd.

The EFCC also accused the defendants of forging a Barclays Bank cheque dated Dec. 29, 1994, for 2.556 billion pounds made payable to Gladstone Kukoyi and Associates, purporting the said cheque to be meant for foreign investment in the construction of three refineries and petrochemical complex in Nigeria.

The commission equally alleged that the defendants attempted to obtain money by false pretences by demanding 2.556 billion pounds from the Union Bank of Nigeria and the CBN as proceeds of the Barclays Bank cheque.

According to the EFCC, the alleged offences contravene the provisions of Sections 1(2), 1(2)(a) of the Miscellaneous Offences Act of 1990.

The commission also noted that the alleged offences contravene the provisions of Sections 467(2)(I), 468 and 501 of the Criminal Code Act of 2004.

The defendants, however, pleaded not guilty to all the counts.

After their pleas, EFCC prosecutor, Rotimi Jacobs (SAN), asked the court for a trial date.

He had prayed the court to remand the defendants.

The defendants, however, through their counsel, informed the court that they had filed  bail applications.

The judge adjourned the case until Feb.19, for hearing of the bail applications.

He ordered that the defendants should be remanded pending the outcome of the bail applications.

BAYELSA: What We’ll Do About Supreme Court Verdict – INEC