2019: Report Foresees Violence In 8 States, And For Shocking Reasons 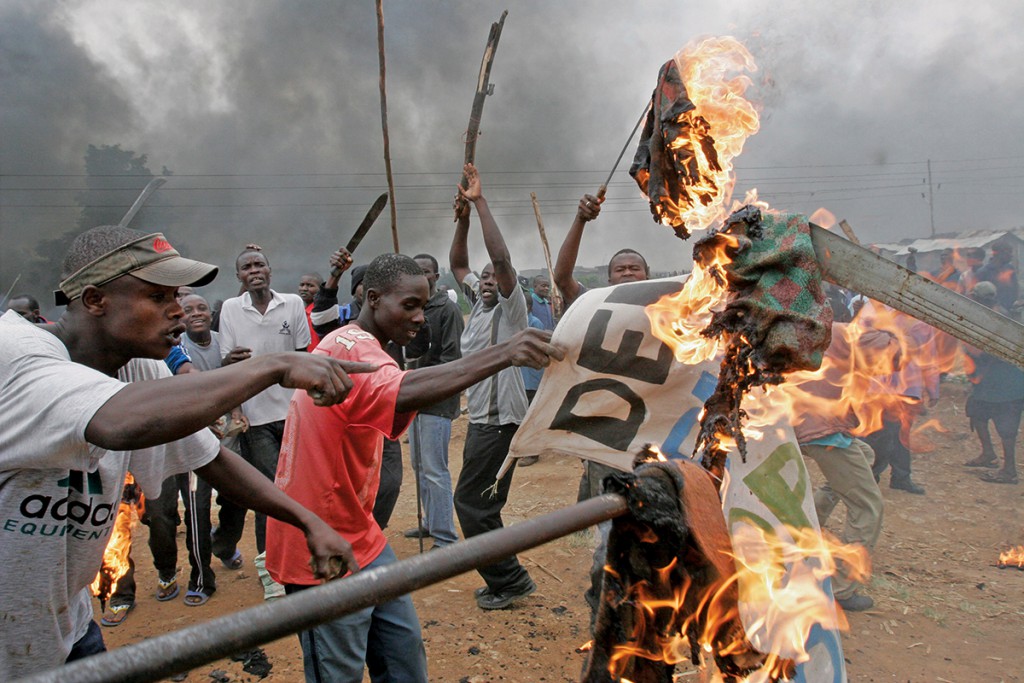 Unless challenges that pose security threats to the 2019 general elections are properly understood and addressed, election and post-election violence may be inevitable in many parts of the country, a report has stated.

An analysis of the 2019 election scenario by the United States Institute for Peace states that the likelihood of violence during and after the election is high but “not inevitable” and specially identified eight states with the highest risk of break- down of law and order.

According to the report based on over 200 interviews conducted between March and April this year, the states more likely to explode in electoral violence are: Adamawa, Plateau, Kano, Kaduna, Ekiti, Anambra, Lagos and Rivers.

In 2015, the threat of Boko Haram insurgents forced the Independent National Electoral Commission (INEC) to relocate some communities to Yola, the state capital to enable them vote in the election. But in 2019, the report notes, the security challenge has shifted to the Fulani herdsmen/farmers clashes.

“Adamawa is one of Nigeria’s most ethnically and religiously diverse states. Because of this diversity, respondents expressed concern that pastoralist-farmer conflicts could particularly escalate along religious lines, as it is widely perceived that Muslim pastoralists are targeting Christian farming communities. Furthermore, there is a risk that the clashes could be used by politicians for partisan objectives,” the report notes.

Besides, Adamawa is the home state of former Vice President Atiku Abubakar who is seeking to run for the office of president on the platform of the opposition Peoples Democratic Party (PDP), a party he recently defected to from the ruling All Progressive Congress (APC). Mr. Abubakar, it is believed, would be a determining factor in a peaceful 2019 presidential election largely because of his ambition and wealth.

The report states: “Several respondents identified former vice president Atiku Abubakar, who hails from Adamawa, as an important factor in the prospects for electoral violence. In 2017, Atiku, who is rumored to be considering a run for president, left the APC, a party he helped form, for the PDP. Some believe that although Atiku is unlikely to win the presidency, he will be competitive in the presidential vote in his home state (and make Adamawa electorally competitive at the national level). As the state’s wealthiest man, Atiku is expected to dispense his largesse to further his political aims, and some fear that could potentially incentivize violence. Explaining the appeal of Atiku’s money, one observer noted, “We see it as violence, they [thugs] see it as business.”

If Mr. Abubakar does not run in the election, it is also believed he could act as a spoiler for either of the major parties.

In Anambra, the activities of the Independent People of Biafra (IPOB) and the cut-throat struggle for the state among three wealthy “god-fathers” who belong to three different parties- Peter Obi(PDP); Chris Ngige (APC) and Governor Willie Obiano (APGA)- pose the most potent threat of election violence in the state.

“Despite the peaceful conduct of the 2017 elections, uncertainty remains ahead of 2019, notably with respect to IPOB. As another respondent explained, “That IPOB did not disrupt the gubernatorial election does not mean it will not disrupt the 2019 elections. The group is unpredictable.” Many respondents expressed concern that IPOB’s grievances remain unaddressed. They fear that on the bigger stage of the national elections, when IPOB’s agenda would have greater visibility outside the southeast region, the group might violently relaunch itself against the Nigerian state,

“Anambra has a number of major “godfathers”—prominent, wealthy individuals who shape the politics of the state and are sharply divided along party lines, which creates the conditions for violence. There are concerns that the influence of the state’s godfathers is increasing in 2019 as the cost of election campaigns rise, making access to political finance even more important, and raising the stakes.”

The historic alliance across ethnic and religious divides that brought APC to power in Kaduna has been fractured, according to the report which blamed it largely on Governor Nasir El-Rufai’s leadership style that has isolated many politicians and religious leaders.

“As a result, El-Rufai is regarded as a divisive figure. His approach has contributed to intraparty conflicts within the APC, which in Kaduna has three factions. In response to these disputes, El-Rufai has been combative. The offices of one faction were demolished on the orders of the governor, and the dispute, according to some within the party, is “irreconcilable.”

In Kano State, Governor Abdullahi Ganduje and his predecessor, now a sitting senator, Rabiu Kwankwaso have fallen out, forcing the latter to decamp to the PDP last Month.

The report says: “There is widespread pessimism about the prospects for reconciliation, and many respondents argued that electoral violence in 2019 is likely to arise in the governorship race. As one respondent bemoaned, “The only way out of conflict in political parties is internal democracy, and we don’t uphold that.” Added another, “There were many attempts by reputable people in Kano to reconcile Kwankwaso and Ganduje. They failed.” Said yet another interviewee, “The problem isn’t a lack of prescriptions, it’s the implementation of them.”

Another state where rivalries between two men holds the potential for high violence is Rivers State where a zero-sum relationship of the APC and PDP nationally, and the personal rivalry between EzenwoNyesom Wike of the PDP, and Minister of Transport Rotimi Amaechi of the APC. Now the chair of President Buhari’s reelection campaign, Amaechi is strongly motivated to win back the governorship and to demonstrate to the federal APC that he can carry the state. Wike, on the other hand, is determined to keep the state.

“The personal rivalry has continued with combative media rhetoric and a violent altercation in November 2017, when Amaechi visited Rivers State. As one respondent described, Rivers “is just a rematch of the federal level on a smaller scale but will likely be much more violent than anything that happens in Abuja, “the report states.

Plateau State presents a different security challenge.Though the middle-belt state of Plateau has a long history of violent intercommunal conflict, great ethnic and socioeconomic diversity, and susceptibility to violence in neighboring states spilling over, the state has not usually witnessed conflict linked to the conduct of INEC-managed national elections.

But the report suggests that attacks attributed to pastoralists in some local government areas have aggravated tensions along ethnic and religious lines. “Respondents outside the government perceive that neither the federal nor state governments are taking steps to address these security challenges. In 2015, citizens displaced from the BarkinLadi and Riyom LGAs who attempted to return to their places of registration to vote were forcibly prevented from doing so by those now occupying those areas. There are fears that this may recur in 2019.”

Intra party rivalries within the APC, which manifested during the last state congresses in the state, may be the major cause of explosion in Lagos State. The report observes that despite Tinubu’s influence and the APC’s current dominance in the state, intraparty rivalries are challenging the APC’s ability to manage party disputes. Much of the ability to resolve crises and to manage aggrieved party members is attributed to Tinubu, but they may become unmanageable as 2019 approaches.

In Ekiti, grievances over the results of the last governorship election, which saw the ruling party in the state (PDP) lose to the APC, may threaten a peaceful conduct of the election in 2019.
In view of the widespread security challenges in the country, the report admits that the list of states prone to electoral violence may be more, noting that the 2015 elections were widely heralded as a success, in part because violence was relatively contained.

“But the approach to confronting electoral violence in Nigeria has changed little in recent years, despite significant shifts in the political and security context. And where there is continuity in the risks, not enough has been done to mitigate these challenges. A successful approach to mitigating election violence will require a more effective response by existing institutions, particularly INEC, the police, and the security agencies, and greater innovation in reply to these contextual shifts,” the report concludes.

FACT-CHECK: Atiku’s Claim That 90% Of Nigerian Northerners Are Not On Social Media Is…