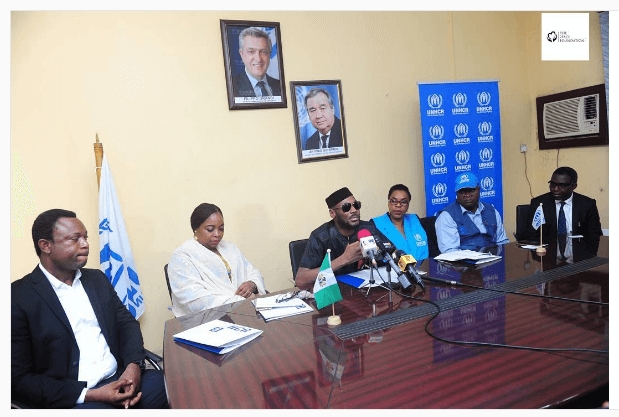 Idibia, who made the presentation to UNHCR in Lagos, said that he was particularly touched when he visited camps of the Internally Displaced Persons (IDPs) in North-Eastern Nigeria recently. 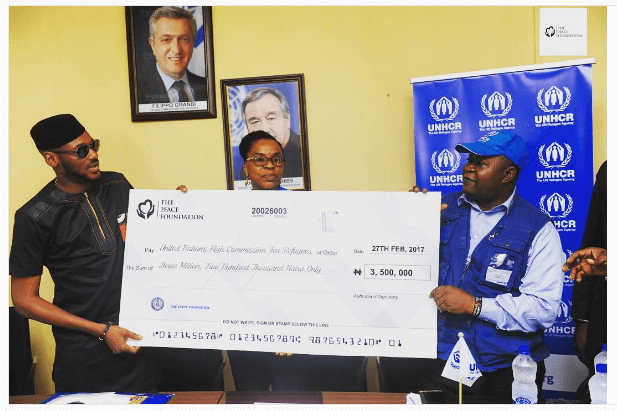 The Nigerian music artist said that he was donating the money to the agency to assist it in alleviating the living conditions of the IDPs, who had been subjected to harrowing experiences in the various camps.

“The conditions I met the internally displaced persons, when I visited their various camps were terrible. They were really terrible.

“The 2Face Foundation has, therefore, decided to enter into partnership with the UNHCR to see how we can help put smiles on the faces of these persons. “My foundation is today presenting this cheque to the UNHCR to support it in its operations of alleviating the sufferings of these IDPs,’’ he said.

Idibia called on other well-meaning Nigerians to come all out and support the International organisation in its effort at protecting the millions of Nigerians in the various camps.

He said that it had become obvious that the agency and government alone would not be able to address the current socio-economic problems facing the IDPs.

I stand By My Comments, Brymo Dares 2Baba Over N1bn Defamation Suit

The UNHCR’s Acting Country Representative to Nigeria, Ms Brigitte Mukango-Eno, commended 2Face for the humanitarian gesture, adding that her Agency currently needed public support for its operations in the North East.

Mukango-Eno, who was represented UNHCR’s External and Donor Relations Officer, Mr Hanson Tamfu, said that the activities of Boko Haram in the North- East had overstretched the agency’s financial base.

“We sincerely want to express the gratitude of the UNHCR to 2Face. This is a right step toward our private sector following.

“Over these years, it has become important for us, as an organisation, to depend on the private sector, for us to be able to meet our responsibilities.

“2Face has scored a very important goal by discovering the UNHCR Office within the UN system.

“We want to use this opportunity to appeal to other private Nigerians and philanthropists to emulate this gesture by the 2Face Foundation in alleviating the conditions of the IDPs in the North East,’’ she said.

According to her, the UN Refugee Agency, currently responds to the needs of more than 1.8 million internally displaced persons in Nigeria. (NAN)

You Are Causing Serious Hardship For Travellers, 2Baba Slams NCDC Over Failed Portal

‘All We Want Is Justice,’ FG Tells Libya Over Nigerian Burnt To Death