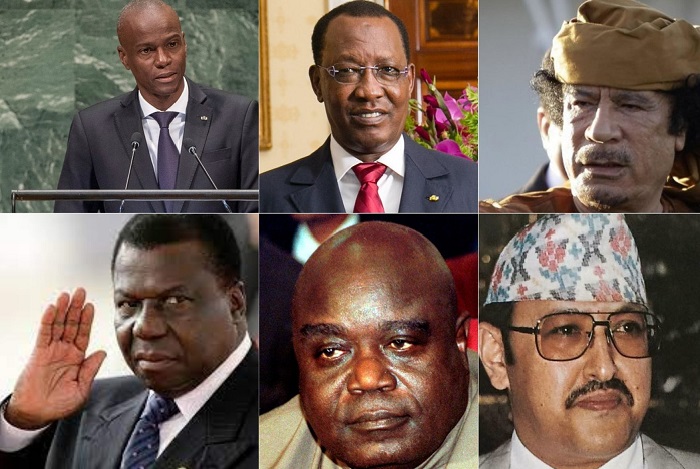 The Haitian National Police, on Monday, disclosed that operatives have made some arrests regarding the assassination of President Jovenel Moïse on July 7.

Recall that President Moïse (53) was killed in a mid-night attack on his private residence in Haiti’s capital, Port-au-Prince.

The police vowed to unravel the cause of his death.

“The Director General of the PNH announces the arrest of Christian Emmanuel Sanon as part of the investigation into the assassination of the President of the Republic,” it stated on social media.

The United Nations had described the incident as an ‘abhorrent act’ while condemning it.

THE WHISTLER reports that in the last 21 years (2000), the following presidents or heads of state were assassinated or said to have died through gunshot injuries while in office.

According to reports, a group of assassins shot at President J Moïse of Haiti at his residence on July 7. His wife was also wounded during the attack. Investigations are ongoing.

The country’s army had said that he was killed during a shootout between the country’s military and rebels.

FACT CHECK: Can UN Intervene In Biafra Agitations In Nigeria?

Libya’s leader, Moammar Gadhafi, was said to have been killed on October 20, 2011 during a civil war in Sirte.

Joao Bernardo Vieira (69), the president of Guinea-Bissau, was assassinated in the country in March 2009.

Reuters reported that soldiers killed him “in an apparent revenge attack for the slaying of the army chief of the unstable West African country.”

King Birendra Bir Bikram Shah Dev, who doubled as Head of State of Nepal (from 1972 until 2001) was reportedly killed by his son, Dipendra.

The Guardian UK reported that he was “gunned down by his own son and heir after what is said to have been a dispute at a family dinner party over the son’s choice of bride.”

Democratic Republic of Congo’s president, Laurent Kabila, was killed in 2001 in what was said to be a coup template.

According to Reuters, the Congolese presidency stated that Kabila died after being shot by one of his bodyguards. The bodyguard was killed afterwards.

Tokyo 2020: You Are Going To The Olympics To Make History, Osinbajo Tells Team Nigeria

We Will Keep Investing In Nigeria Even Without PIB- SEPLAT