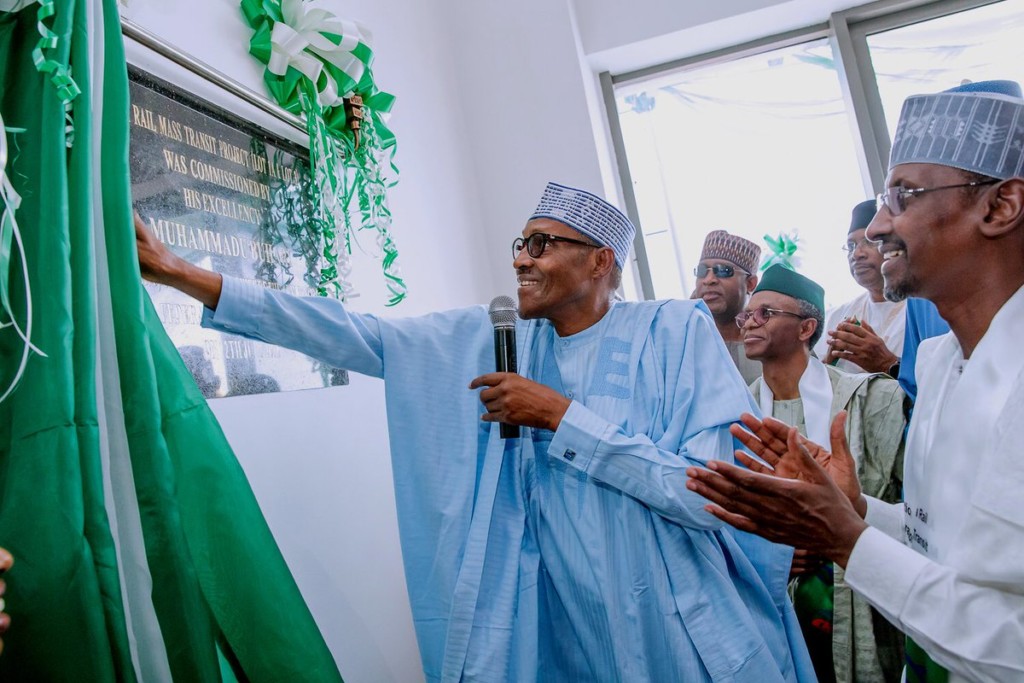 Twitter/@MBuhari
87
SHARES
ShareTweetSubscribe
#mc_embed_signup{background:#fff; clear:left; font:14px Helvetica,Arial,sans-serif; width:90%;} /* Add your own Mailchimp form style overrides in your site stylesheet or in this style block. We recommend moving this block and the preceding CSS link to the HEAD of your HTML file. */ (function($) {window.fnames = new Array(); window.ftypes = new Array();fnames[0]='EMAIL';ftypes[0]='email';fnames[1]='FNAME';ftypes[1]='text';fnames[2]='LNAME';ftypes[2]='text';}(jQuery));var $mcj = jQuery.noConflict(true);

President Muhammadu Buhari has said that his APC-led government has kept its promise of delivering infrastructural development.

He said this on Thursday in Abuja when he commissioned the completed Lot 1A and 3 of the Abuja Rail Mass Transit System,

According to him, the project is a demonstration that the APC government is committed to the completion of critical infrastructural projects, and pledged that the government would continue to provide the necessary funding until other aspects of the Abuja rail mass transit system are completed.

He further expressed the optimisim that a modern rail service would bring about a boost to the FCT economy and social life, while commending the FCT Administration for its effort in ensuring that the project is completed.

The president also extended appreciation to the people and government of China for their investment in the economy and the people of Nigeria.

He said this gesture has further cemented the already existing cordial relationship and developmental partnership between Nigeria and the People’s Republic of China.

According to him, “I am indeed thankful to the Government and people of China for their investment in the economy and people of Nigeria. I sincerely applaud the CCECC Limited – the Contracting Firm, for the quality and delivery of this project. Similarly, I thank the EXIM Bank of China for providing the needed funding,”

Earlier in a welcome address, Minister of the Federal Capital Territory, Malam Muhammad Musa Bello, explained that the Abuja Rail Mass Transit System is an integral part of the FCT Transportation Master-plan.

According to him, it was designed primarily to transport large number of commuters and goods between Satellite Towns and the City.

Malam Bello further disclosed that the Implementation of the project has been divided into phases, with phase 1 being what is being commissioned. Phase 1, he revealed consists of Lot 1A & 3 with a total length of 45.3 kilometres.

Both Lots, he said, connect at the Idu Station to enable easy passenger transfer with the National Rail line linking Kaduna and Abuja.

He said the entire Abuja mass rail project is packaged into 6 Lots planned for phased development, based on preferential demand and available financial resources. It would also integrate with the National Rail Network when eventually completed.

Giving further breakdown on the cost of the project, the minister said the Lots 1A and 3 cost the total sum of US$823,540,545.87, with 60 percent of this sum provided by the China – Exim Bank while the Federal Capital Territory Administration (FCTA) provided the remaining 40 percent.

The FCT Minister equally disclosed that the FCTA has also taken delivery of the three coaches meant for initial operations while awaiting the arrival of the rolling stock of 48 coaches.

To this effect, FCTA, he disclosed has concluded an infrastructure soft loan agreement with Exim Bank of China for the supply of the remaining coaches, including their maintenance for three years at a cost of US$194,008,602.43.

In his goodwill message at the occasion, the Ambassador of the People’s Republic of China to Nigeria, Dr. Zhou Jingpian, praised the Nigerian government for their commitment to improving the living conditions of the people of Nigeria.

He described the relationship between Nigeria and China as very cordial while giving assurances of the commitment of the Chinese government to stronger partnership and collaborating with Nigeria.