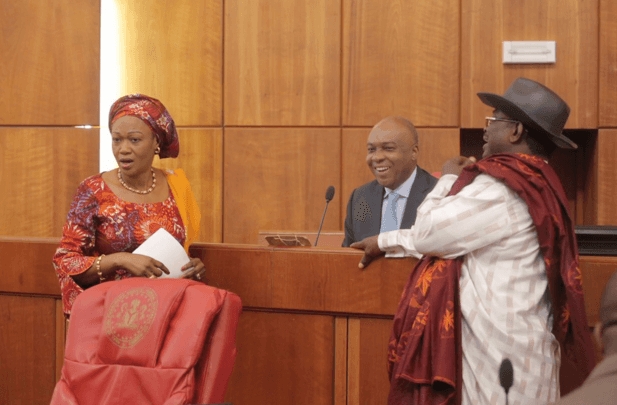 The Senator representing Lagos West Senatorial District, Senator Oluremi Tinubu, on Tuesday, asked the leadership of the All Progressives Congress (APC) to affirm its policy of zero tolerance for gender discrimination by sanctioning Senator Dino Melaye over his alleged “threat of physical assault and abuse against” her.

Mrs Tinubu had alleged that Melaye would have beaten her up but for the timely intervention of her colleagues.

Tinubu, the wife of the national leader of the APC, Asiwaju Bola Tinubu, in her separate letters, said the Kogi West Senatorial District senator actually issued threats of rape and assault against her and boasted that he would face no consequence even if he fulfilled the threats.

She urged the leadership of the APC and the Senate investigate the development with a view to saving her from being the victim of Melaye’s threat.

She stated, “What took place at that session was nothing short of a threat of physical assault and abuse against me by Senator Melaye. As such, it was an affront to the Senate, this government and to our party.

“For a party member to so antagonise and attack another APC member in this fashion places the party in disrepute and undermines the unity needed to accomplish the sober task of reforming Nigeria for the better.

“Much of what took place has been widely reported in the media. However, I would like to place on record for the party this formal complaint in hope that the party will act to appropriately sanction Senator Melaye for his malign behaviour.

“In this way, the party will affirm its policy of zero tolerance for gender discrimination and to restore its reputation as a vehicle of positive change and not an arm of regression and intolerance towards women.

“During the 12 July Executive Session, I was duly recognised to speak by the Senate President after Senator Dino Melaye had spoken and berated some Senate colleagues for their perceived roles in the judicial case involving the Senate Ieadership.

“Although I remained silent and attempted no interjection during his statement, Senator Melaye tried to abridge my rights as a Senator by hectoring at me and interrupting my contribution.

“At one point, I cautioned him about the use of his language and the threats made, reminding him that other senators were there by equal right as he and represented their constituents.

“In a burst of apparent rage, Senator Melaye charged at me in what can only be seen as effort to physically attack me.

“The attack was only prevented by some respectful senators, who moved to impede his path or otherwise block him from approaching closer to me. I thank those senators for their personal courage and sense of decorum.

“Senator Melaye hurled foul and vulgar language at me, what he said should never be heard in any public institution, let alone the floor of the Senate.”

Tinubu further alleged that her male colleague denigrated her as a woman, adding, “Senator Melaye threatened to beat me on the floor of the Senate simply because I dared to express an opinion different from his. I am both a ranking Senator and a woman.

“Melaye took neither into consideration as he issued threats of rape and assault, whiIe boasting that he would face no consequence even if he fulfilled these criminal threats.

“Compounding the damage inflicted by Senator Dino Melaye is the fact that we are both of the APC.

“Thus, I am compelled to report this incident. It also gives me great concern that the Senate Ieadership has heretofore been silent on this matter as if condoning the errant behaviour of the Senator.”

She added, “Through this letter, I officially inform the party about the improper behaviour of Senator MeIaye and ask the party to investigate this matter in order to restore the public image and moral standing of the
party and of the APC members in the Senate.

“In this manner, we show that we reject the misconduct that has wronged our nation and its people for so long. Only if we act against such excesses will the people truly believe we are committed to the reforms we have promised them.

In her letter to Saraki, Tinubu noted that a week after the indecorous eruption by Melaye, the Senate leadership had been silent and had not reacted to the threatening misconduct of Melaye.

She stated, “This serious transgression of legislative behaviour is not allowed to pass, I formally submit for the record that l object to the reckless misconduct of Melaye during the July 12 Executive Session.

“What he did was completely unjustifiable and contrary to the established customs and norms that govern the behaviour of members of this body.

“For merely voicing my opinion on the floor of the Senate, which is the fundamental right and duty of every Senator, I was verbally abused and threatened by Senator Dino Melaye.

“He did not stop there; he used blatantly sexist and misogynistic language offensive to every woman in Nigeria and offensive to every person who truly believes that gender discrimination has no place in the Nigeria we are trying to build for ourselves and all future generations.

“ln summation, unless Melaye is appropriately disciplined, he remains a danger to me and to the Senate at large. He has promised twice within one week to attack me.

“In an attempt to preserve the dignity of the Senate, I have refrained from saying anything in public outside of the Executive Chamber about this incident.

“However, Melaye has become unmoored and has since paraded his misconduct in public as if to threaten a female senator is a badge of pride. lt is a sad day for Nigeria if such misconduct is to be condoned and smiled upon.”