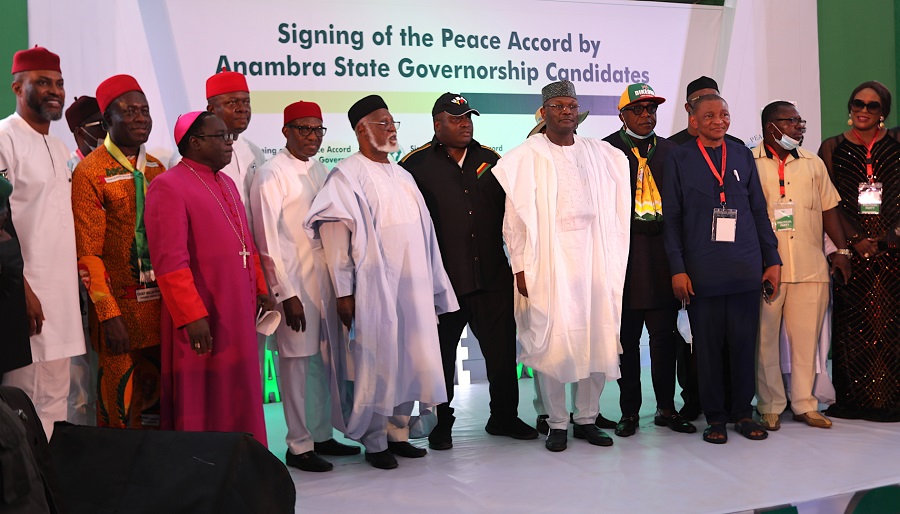 Candidates for the Anambra governorship election on Thursday signed a peace accord in Awka, the State capital.

The Accord, which was facilitated by the National Peace Committee chaired by former military Head of State, General Abdulsalami Abubakar, was witnessed by Chairman of the Independent National Electoral Commission (INEC), Professor Mahmood Yakubu.

Also were Mr Valentine Ozigbo of the Peoples Democratic Party, Godwin Maduka of the Accord Party (AP), Etiaba Chukwuogo of the Action Alliance (AA), Nwankwo Chidozie of the African Action Congress (AAC), Onyejegbu Okwudili of the Allied Peoples Movement (APM) and Ohajimkpo Emeka of the New Nigeria Peoples Party, who attended and signed.

Other candidates who took part in the exercise were Ezenwafor Victor of the National Rescue Movement (NRM), Nnamdi Nwawuo of the People’s Redemption Party (PRP), Uzo Godwin of the Social Democratic Party (SDP), and Okonkwo Francis of the Zenith Labour Party (ZLP).

Speaking during the signing ceremony, the INEC chairman said, “We believe that Anambra cannot be different from Edo and Ondo.

“We are confident that just like Edo and Ondo, the outcome will be a reflection of the people’s will.

Also speaking at the event, Gen Abubakar’s said, “Almost every election in Nigeria is accompanied by violence. We, the members of the National Peace Committee support a peaceful Electoral process.

“We cherish Anambra state. We cherish the peace of Nigeria. The signing of the peace accord is not a mere exercise.

“It is indeed a clarion call for all the candidates, political parties, and all Anambraians to commit themselves to a peaceful process.

“I have been assured by the INEC chairman to ensure that the process will be free and fair. All of us have the responsibility to deepens the culture of electoral integrity in the country.”

The Peace Accord is equally binding on each candidate and their political parties and it is expected to encourage signees to take proactive steps “towards ensuring a conducive environment for the conduct of a credible electoral process.”

The signees also pledged to “fully abide by the Constitution of the Federal Republic of Nigeria, to respect the rules and regulations as laid down in the Legal Framework for Elections in Nigeria, and to adhere to best international standards.”

Under the accord, the candidates and their parties are expected to “support all institutions of government involved in conducting or securing the elections – in particular INEC and the security forces – to act with professionalism, impartiality and transparency.”

They are also to “encourage state agencies, institutions and public officers not to support partisan interests in any form” and to “encourage their political stalwarts and supporters to desist from propagating fake news and publishing fake results via social media and to ensure uninterrupted and uncompromised freedom of expression and information, both online and offline, throughout the electoral process.”

The accord demands of the signees to “respect that the results can only be announced by INEC, and to accept the outcome of the vote, as long as it is adjudged to be free, fair and credible, devoid of intimidation and conducted in accordance with the provisions of the law.”

OPEC Snubs US, Insists On 400,000 Barrels Per Day Production Output