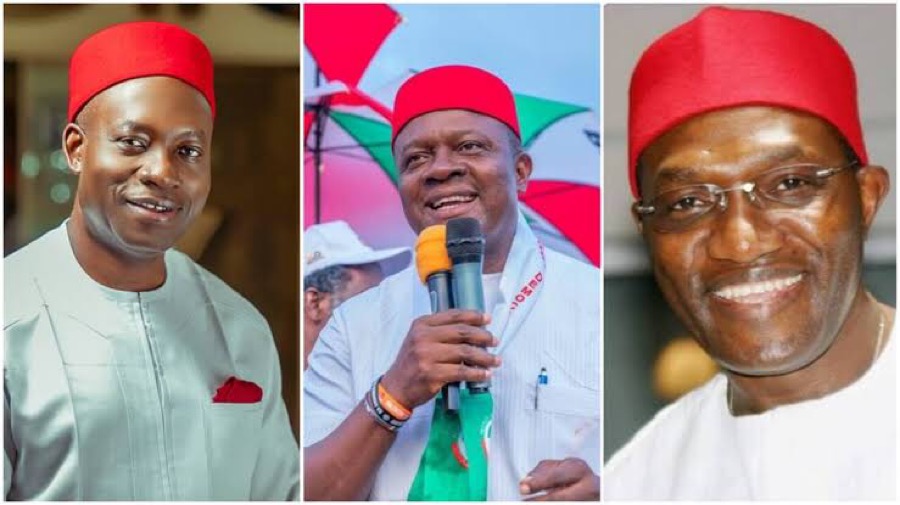 The candidates used the opportunity to get at each other to show why the others are unsuitable to be elected governor of the state, with  the issue of IPOB, insecurity and economy generating more contention.

Senator Uba and Soludo did much to provoke each other with the two pointing fingers at each other , forcing the  anchors, Mr Reuben Abati and Ngozi Alaegbu to call for decorum from the candidates.

The candidates spared no time in squaring up when asked a general question on how they will solve Anambra problems if they emerged governor.

The APGA candidate accused the APC candidate of doing nothing while being at the senate for 8 years, adding that he had nothing to offer.

He accused Mr Uba of belonging to a party that created insecurity in Anambra while also saying the insecurity and kidnap of a sitting governor was a legacy of the PDP.

Responding, Mr Uba was forced to deny  being an accessory to the kidnapping of then Governor  Chris Ngige, clarifying that he was out of the country with President Olusegun Obasanjo when news came of the kidnap of the governor.

He said he would solve the security problem by establishing a distress line to ensure the public make calls for help.

The debate descended into exchange of words when the APC candidate veered off by telling Mr Soludo that he brought him into the Central Bank of Nigeria.

He expressed also expressed reservations at the claim of Mr Soludo that he had been the senate for eight years without doing anything.

Mr Soludo accused Mr Uba of not possessing the minimum school qualification, the Senior School Certificate, SSC, to which Uba responded by saying he obtained the SSCE in 1974.

Mr Soludo quickly attacked him by accusing him of forgery, saying he was not telling the truth.

When the PDP candidate was called to speak, he said Soludo and Uba were PDP of the past who had failed to acknowledge the broken nature of the state.

He said, “You are not fit to govern if you cannot acknowledge that Anambra is broken.

“The road network is worse in Anambra. Why do we have poor competitive index? It’s because the infrastructure is bad.”

Ozigbo accused Soludo of speaking “grammar” about the achievements of APGA government in Anambra when the evidence on ground do not justify claims of success.

On insecurity and IPOB, Soludo said his position has been well known, saying he is a pan-Africanist but insisted IPOB “must be heard.”

He said, “I don’t like his style. In a democracy,  you put everything on the table. South East leaders, youth leaders; we all need dialogue to arrive at a consensus on what’s best for the state.”

The PDP candidate said the emergence of IPOB “is a failure of leadership. Agitation happens when leaders fail the people. When there is a vacuum, agitation happens.

“I urge IPOB to be peaceful” so that “we can sit to chart a new course.”

The APC candidate also suggested that engagement and dialogue was the way forward, adding he would call IPOB to a meeting to “find out” what they want, to which Soludo said Uba must be “living in the moon” for not knowing what IPOB wants.

Many must have been relieved at the end of the over one hour debate when the three candidates warmly embraced one another and joked about some of the things said during the debate.

Each candidate spoke on what they would do for the state on economy, education, insecurity, infrastructure and others in attempt to persuade the electorate for votes.