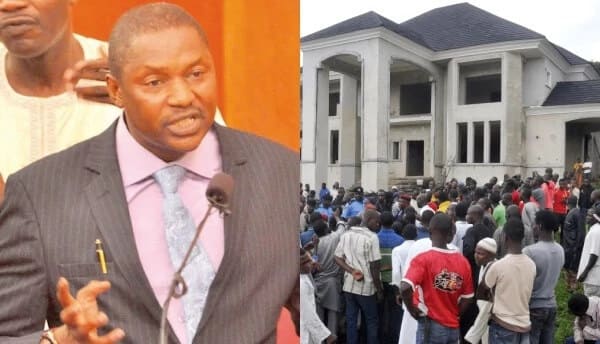 The Federal Government, on Thursday, in Abuja, presented a cheque of N135 million to victims and family members of the September 18, 2013 killings of some squatters in an uncompleted building in Apo, Abuja.

Recall that operatives of the State Security Services, SSS, allegedly acting on intelligence, raided the building resulting in the death of eight people while 11 others sustained injuries.

The Attorney-General of the Federation and Minister of Justice, Abubakar Malami, (SAN) who presented the cheque to the National Human Rights Commission, NHRC, for onward payment to beneficiaries said the money was approved by President Muhammadu Buhari.

“I engaged the NHRC, the National Association of Commercial Tricycle and Motorcycle Owners and legal representative of the plaintiffs and also the Sarki of Apo and the NGOs involved.

“I also engaged and the victims and their immediate families in ensuring that upon payment, the victims will be accorded the fair and equitable awards to ensure that the money gets to the beneficiaries.

“I am glad to inform you that the NHRC has received the payment from the DSS and the process of payment of the monies to the beneficiaries starts today.”

“Today makes it four years, seven months and six days since the incident that took the lives of eight of our members and caused indescribable damage to others happened.

“This is how long we have been toiling not just to prove our innocence but to also get compensation for the victims families and the injured,” he said.