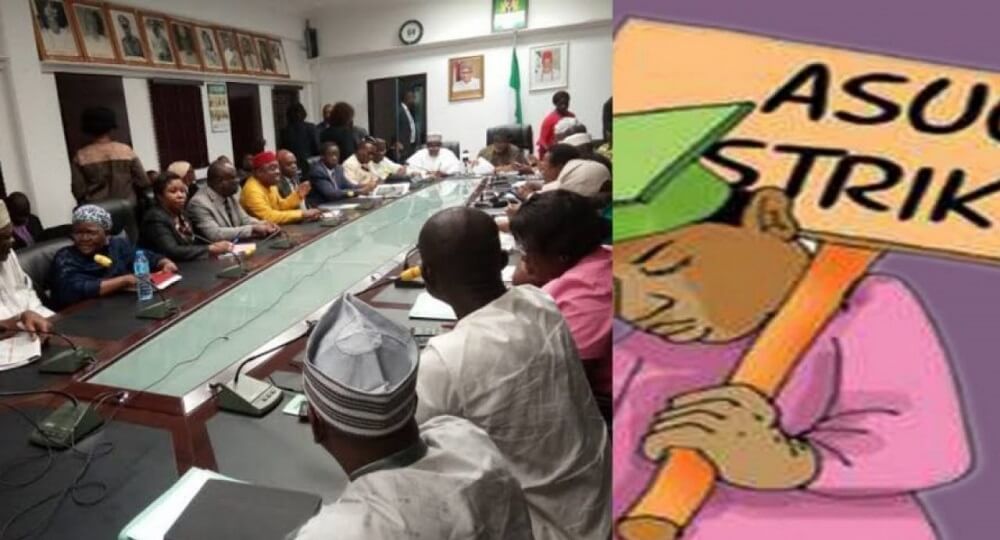 The Federal Government has constituted a 14-member committee to help look into the issues surrounding the ongoing ASUU strike as well as the demands made by the Union.

The decision to bring in the committee was reached following the closed-door meeting between the Minister of Education, Adamu Adamu, and the Pro-Chancellors and Vice-Chancellors of Federal Universities.

The Director of Press and Public Relations of the Federal Ministry of Education, Mr. Bem Goong, made this known when he briefed the press following the meeting.

According to him, the committee will be majorly concerned with reaching a compromise between the FG and ASUU on the issues of remuneration of the lecturers as well as the highly contested “No Work-No Pay policy.”

Speaking on whether or not the government would consider going back on the policy, Goong said the committee would look into it specifically.

“There has been an appeal generally for the system to take a second look at that and that is what the committee will look into,” he said.

Goong did not disclose a timeframe within which the committee was directed to achieve its task but judging by the atmosphere of the meeting, he revealed that it is expected to bring feedback in a matter of days.

THE WHISTLER reported that before the meeting began, the Minister had said that the FG would not repeat the mistakes of past governments by signing any agreement it will be unable to implement.

“In all, we have been doing, our guide has been the directive of Mr. President Muhammadu Buhari, namely, that while the unions should be persuaded to return to work, Government should not repeat the past mistakes of accepting to sign an agreement it will be unable to implement. Government should not, in the guise of resolving current challenges, sow seeds for future disruptions,” he said.

The Minister lamented that the disagreement between the FG and the union has affected him, stressing that he has experienced personal anguish over the matter.

“For me, the past two weeks have been a very dark period of personal anguish and internal turmoil. I used to deceive myself that in a climate of frankness, and with mutual goodwill, it will fall to my lot to bring an end to the incessant strikes in the education sector.

“This has not proved possible, or, at least, not as easy, quickly and straightforward, as I used to think,” he said.

“The President of ASUU has been reported to have said the Union would no longer negotiate with the current Federal Government.

“This position must be resisted. Government and ASUU have no option than to continue talking until our universities have reopened their doors to students, who clearly are the principal victims of the seemingly unending strikes,” he said.

Adamu emphasized that all parties involved must continue to work together to restore the public university system to where it was in the 60s and 70s.

He further charged the Pro-Chancellors and Vice-Chancellors, as the most important officers in the university system, to demonstrate more commitment to ending the ongoing strike.

“As Chairmen of Councils and Senates – the highest policy and academic bodies in the system – you must consider it your paramount duty to promote policies and actions that will discourage industrial disputes on our campuses. The government will continue to support the physical and academic development of its universities. The government will continue to reasonably enhance the working conditions of all university staff, academic and non-teaching,” he said.