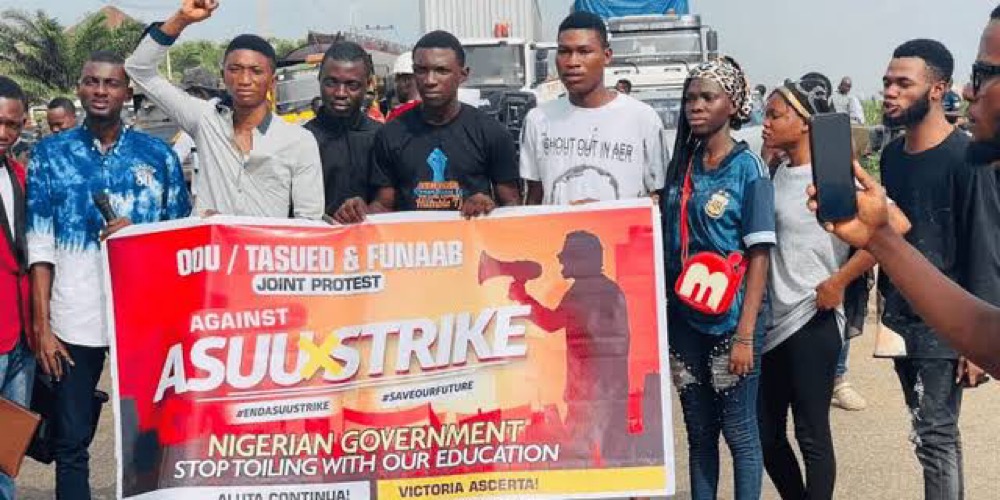 Scores of undergraduates from government owned universities in Ogun State on Monday trooped out to protest the lingering strike embarked upon by the Academic Staff Union of Universities.

The students who were in support of the demands being made by their lecturers reportedly blocked the busy Benin-Ore-Sagamu Expressway to register their anger about the strike action which is already three months old.

The students, who staged a joint protest, are from Olabisi Onabanjo University, Ago Iwoye; Tai Solarin University of Education, and the Federal University of Agriculture, Abeokuta.

Some of the inscriptions on their banners and placards read: “Stop Toying with Our Education; Education is our rights; Stop wasting our destinies,” and many others.

The TASUED Students’ Union President, Sharon Great, while addressing his protesting colleagues said, “We have all come here today to shut down the Benin-Ore Expressway to make our demands met by the Federal Government and to also pass a message to the state governments.

“Nigerian universities need proper funding. It is the responsibility of the FG and state governments to bring about a viable educational system. That is why we have gathered here today to show that our demands must be met by the Federal Government.

Kaduna Train Attack: ‘We will Not Vote for Amaechi’ – Families of Abducted Victims Decry Minister’s Inaction 7 Weeks After

‘Are You Saying Judges Have No Right To Ask For Salary Review?’- Judge Rails At FG’s Lawyer