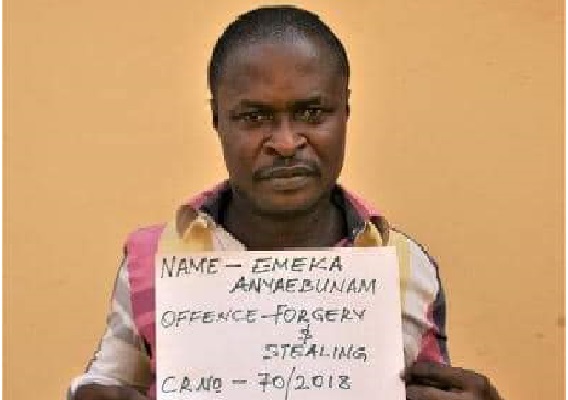 An ex – banker, Emeka Anyaegbunam has bagged two years jail term after he was convicted by Justice V. Nwoye of the Enugu State High Court on a one-count charge of forgery, criminal diversion of funds and obtaining money by false pretence.

Anyaegbunam’s conviction was secured by the Enugu Zonal Office of the Economic and Financial Crimes Commission (EFCC).

According to a statement posted on the Facebook page of the EFCC,  Anyaegbunam, who worked with a new generation bank, was arraigned on February 1, 2018 for cashing on the gullibility of a client who asked him as his account officer to acquire a federal government treasury bill to the tune of N2,000,000 (Two Million Naira) for him, which he never did.

The statement further added that the former banker rather forged signatures of some of his senior colleagues and using same to fill the Treasury Bill Certificate of the complainant, and subsequently withdrew monies from the said account.

“The convict, investigation revealed, transferred the withdrawn sums from time to time to his personal accounts and that of his children,” the statement read in part.

“In the course of the trial, prosecution counsel, Michael Ani called one witness and tendered several exhibits against Anyaegbunam to support his case,” the statement concluded.