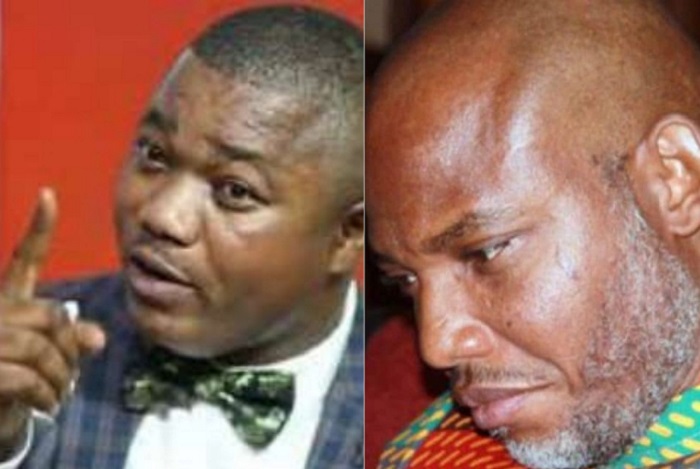 The Federal High Court sitting in Abuja on Thursday was told by counsel for the leader of the Indigenous People of Biafra Nnamdi Kanu, Ifeanyi Ejiofor that his client was having a bad time at the custody of the Department of States Services(DSS).

Ejiofor said before Justice Binta Nyako that the DSS was not treating his client well in line with her orders.

“We want the court to order the detaining authority to keep the defendant in a convenient facility, he is kept in a tiny place, he has not been eaten well. He has been wearing one cloth since his detention.

“Our client is a Jew, he is not allowed to practice his Jewish faith,” he contended.

Nyako responded that the DSS is a detention facility and not a place of comfort.

She directed Ejiofor to provide evidence and affidavit of fact to buttress his claims.

However, she directed the federal government counsel , MS. Labaran to inform the DSS to put Kanu in maximum comfort possible.

“DSS custody is not a five star hotel. Unless I am given an evidence about what you are saying.

“File an affidavit of facts to that effect

“Mr Ejiofor be serious in this matter. He is in a detention facility, there are certain things that are not allowed there. I have visited detention facilities in the US and UK,” the judge said.

Earlier, Ejiofor announced that he was in court over his application for Abrigdement of time following the adjournment of Kanu’s case to January 19 and 20.

Although he said his application has been overtaken by events, he used the opportunity to urge the court to hear his application challenging the competency of the seven count terrorism charges filed against his client.

But Labaran objected, adding that the business of the day was for the court to hear Ejiofor’s application for abrigdement of time only.

In her short ruling, Nyako advised Ejiofor to understand that she adjourned from November 10 to January 19 because of the court’s busy schedule as well as it’s valedictory session holding in December and the Christmas vacation which terminates by January 10.

She however, faulted him for being absent at the last adjourned date.

The judge read out her remaining tight schedule for the year and decided to reduce the time of adjournment by one day, that is January 18.

Kanu was not produced in court and the judge said that was allowed because the business of the court was to hear solely his application for adjustment of time.

She held that the other applications by Ejiofor can only be heard in the presence of his client.

“Application for Abrigdement of time can go on without the defendant but your other applications challenging the competency of the charge cannot be taken because your defendant is not in court.

“I have added 18th January.

“I will take your pending applications on January 18 and then hearing on the trial will continue on January 19 to 20,” she ruled.