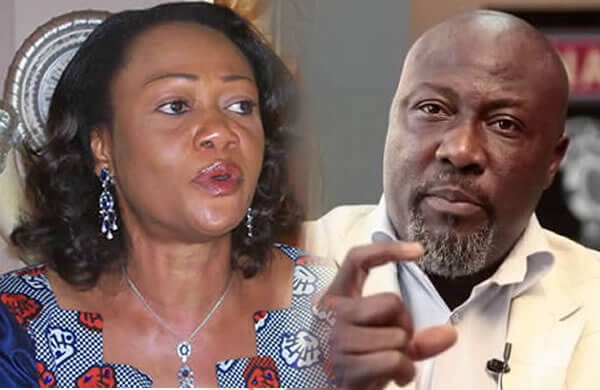 Senator Oluremi Tinubu has disclosed that she has forgiven Senator Dino Melaye for allegedly threatening to assault her at the Senate executive session last week.

She made the statement yesterday when lawmakers from the Lagos state house of assembly and members of the All Progressives Congress (APC) paid her a solidarity visit at the national assembly complex, Abuja.

Tinubu, who is the wife of the National Leader of the All Progressives Congress (APC), Asiwaju Bola Tinubu, said that though Melaye greatly offended her, she forgave him because her religion preaches so.

The senator said that although she has forgiven him, she will fight back if her “space is encroached upon”.

She said, “When the Senate President invited me yesterday and I gave my word. You can see the channel I have taken in the aftermath of the event. I reported to the IGP; I wrote to him also, after I waited for one week. When it happened, it was him I went to. I waited for one week and nothing was done. I also wrote to the party (APC) chairman.

“I met with the senate leadership yesterday (Tuesday) after one week; I met with him (Senate President Bukola Saraki) yesterday. And as a Christian, I said I had already forgiven him (Melaye) for even with the way I was
treated. But the point is that what people don’t realise is that I am a very reserved person.

“After I gave my word to him (Saraki) yesterday, I told myself that at 55 I am not a wimp of anybody.

“I witnessed the Sani Abacha regime and I know what I saw and why I am committed to this cause. But now, my hands are tied to say I forgive people. I am a Christian; when I give my word, I must abide by it. But I am not scared to follow this through.

“I am not championing a cause for women. I am only standing in my space and if my space is encroached upon, I have to fight back. Rosa Parks wasn’t an activist; she just decided to sit in her space and not give up her space anybody in a bus. And that sent a message.

“I want to use this opportunity to thank all the Nigerian women who rose up; the women rights groups who are calling, conducting press conferences and doing a lot of things.”

The senator also sponsoring women groups to protest against Melaye. She said, “I didn’t give anybody anything; I don’t even have N80m in my personal salary account in the Senate. And I don’t think if I have any other savings I want to use it to mobilise women to protest. What about the investments we have put into politics? How much has that done for this country?” Tinubu said.

Dogara Did Not Sack Me, I Stepped Down – Ex-Appropriation Chairman