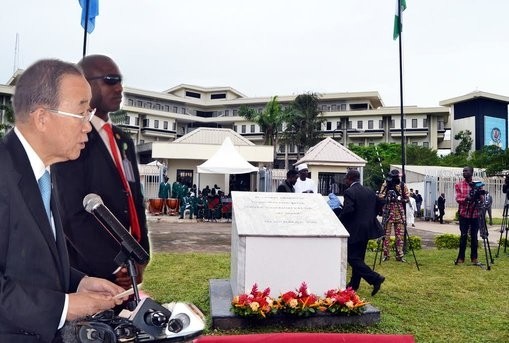 As part of activities marking his two-day visit, the United Nations Secretary General, Mr Ban Ki-moon, on Monday laid wreath at the bomb site of the United Nation’s building in Abuja to commemorate the deadly attack on the global body by Boko Haram militants in 2011.

After laying the wreath, Mr Ban Ki-moon urged the UN workers not to be discouraged by the bombing, but to remain committed to their job for the advancement of humanity.

He said, “Terrorism must be brought to an end not only in Nigeria but the world over so that peace could reign again among the peoples,”

You will recall that on August 26, 2011 a car bomb explosion at the UN building left at least 21 persons dead and 60 wounded.
The Boko Haram sect claimed responsibility for the attack.

In the second day of the official visit, the UN Secretary General will visit health units and immunisation centre in Garki area of Abuja to further assess Nigeria’s efforts towards the actualisation of the Millennium Development Goals.

Part of the activities for Monday is a dialogue and lunch with Nigerian Business actors under the theme “The role of Nigerian Business and Economy in Implementing the Sustainable Development Goals (SDGs) and addressing Climate Change”.

The highpoint of Mr Ki-moon’s visit will be his meeting with President Muhammadu Buhari, which will be rounded off with a joint press conference.

There will also be a dinner hosted by President Buhari in honour of the esteemed guest.

UN Disagrees With CAN, Says Nigeria Will Achieve Peace If Terrorists Are Reintegrated…