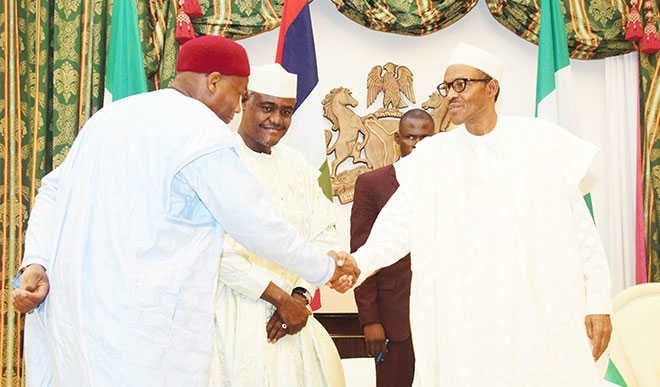 President Muhammadu Buhari has reaffirmed his administrations conviction to totally put an end to the activities of Boko Haram terrorists.

The president who gave the reassurance on Thursday stated that the end of insurgencies besetting the country is now in sight, given the added vigour with which the war against the terrorist sect is now being prosecuted by Nigeria and her allies.

Speaking at an audience with Mr Mousa Faki Mahamat, Chadian Minister of Foreign Affairs and Special Envoy of President Idris Deby of Chad, President Buhari said that with higher morale among troops in the frontline against Boko Haram and their improved logistics, equipment and training, a rapid end to the insurgency could be expected.

The President said however that Nigeria and Chad must be prepared to make more sacrifices to end the scourge of Boko Haram since they were at the very heart of the insurgency.

“We will sustain our effort, and the insurgents will be defeated soon,” President Buhari vowed.
The Special Envoy of the Chadian President said that President Deby appreciated the leadership being shown by President Buhari in the war against terrorism.

“We also appreciate the diligence shown in appointing a commander for the Multinational Joint Task Force, and President Deby believes that the fight will end in a few months.

“Our people rely on us to end the insurgency, because economic development is being hampered. This fight has to come to an end. My coming here is to reaffirm our full commitment. Beyond the number of troops earlier announced, Chad is still ready to commit more soldiers.

“The enemy is weakened already. Let’s stand firm, and neutralize them,” he said.