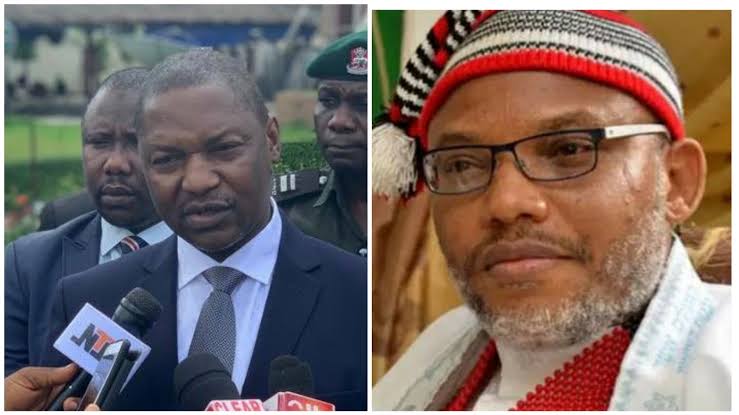 The Attorney-General of the Federation and Minister of Justice, Abubakar Malami, SAN, has accused the leader of the Indigenous People of Biafra (IPOB) of inciting his followers and #EndSARS protesters into violent attacks on security personnel across the country.

Malami disclosed this at a press briefing on Friday while commenting on the outcome of an investigative report submitted by a Presidential Ad-hoc Committee which he chairs.

Recall that Kanu was on Thursday rearraigned by the federal government on an amended seven count charges bordering on terrorism before a Federal High Court sitting in Abuja.

But he pleaded not guilty to every count read to him.

His lawyers subsequently filed an application challenging the competency of the charges.

That will be heard on November 10.

Part of the charges hinged Kanu’s alleged terrorist acts to his radio broadcast.

In the same view, Malami said Kanu used the online Radio Biafra to “commit violent attacks against civil and democratic institutions, particularly the security personnel, Independent National Electoral Commission (INEC), and civilians. He instigated the destruction of public and private properties across the country.”

“The EndSARS protests of October 2020 played into the sinister plans of Nnamdi Kanu, whereby he seized the protests through subversive and inciting online broadcasts and actively commanded and directed attacks on security personnel and facilities,” he added.

The AGF maintained that IPOB is a terrorist group and that the creation of the Eastern Security Network by Kanu constituted a threat to national security.

Furthermore, Malami said that the IPOB leader has local and international support.

According to the committee, the following attacks were carried out by Kanu and IPOB between October 2020 and June 2021:

I. That acting on the instigating directives of Nnamdi Kanu, IPOB members and #EndSARS protesters attacked and killed many security agents, destroyed several public and private properties, including Police stations, public transport buses and other facilities across the country.

II. That on 21st October 2020, Nnamdi Kanu through an online call-in radio programme (Radio Biafra), further instigated IPOB members to burn down all police stations and kill Government security forces, which was carried out and several Security personnel (especially Police Officers) were killed and public and private properties destroyed.

IV. Killing of prominent Nigerians, (recently there were gruesome killings of traditional leaders: Obi 1 of Okwudor autonomous community, Eze E. Anayochukwu Durueburuo and Eze Sampson Osunwa of Ihebineowerre autonomous community as well as the killings of Dr. Chike Akunyili and eight others as well as the killing of Alhaji Ahmed Gulak on 30th May. 2021);

V. That as a consequence of Nnamdi Kanu’s broadcasts, there were nineteen (19) attacks on INEC facilities that resulted in the destruction of offices as well as burning of eighteen (18) INEC logistical vehicles, several election materials, equipment and ICT gadgets in Abia, Akwa-Ibom, Anambra, Cross River, Enugu, Ebonyi and Imo States;

VI. That one hundred and sixty-four (164) police stations and formations, including Police Headquarters, Owerri, Imo State were attacked by IPOB/ESN leading to the death of one hundred and twenty-eight (128) police men {as stated in III above}; one hundred forty four (144) injured while six hundred twenty eight (628) vehicles were destroyed.

VII. That three hundred and ninety-six (396) firearms and seventeen thousand seven hundred and thirty eight (17,738) ammunition were carted away during the IPOB/ESN attacks;

VIII. That there were three (3) IPOB/ESN attacks on Nigerian Correctional Service (NCoS), including the Headquarters of NCoS, Owerri, Imo State where one thousand eight hundred and forty one (1,841) inmates escaped;

IX. That the Headquarters of the Nigerian Immigration Service (NIS), Umuahia, Abia State was also attacked by IPOB/ESN leading to the death of one (1) officer;

X. That there were several IPOB/ESN attacks and destruction (arson) of public and private properties during the EndSARS and Biafra agitations across the country, especially in the South-East and South-South regions, notably the Palace of the Oba of Lagos where twelve (12) flats were completely looted and vandalized, the country home of the Governor of Imo State, Senator Hope Uzodinma, was burnt, over one hundred and fifty (150) buses burnt at the Lagos Bus Terminal, Sen. Ndoma Egba’s home in Calabar Municipal, Cross River State, was completely looted and vandalized, Lagos State DNA and Forensic Centre, City Hall Race Course, First Bank Branch Lagos, Lagos State Public Works Commission, Nigeria Port Authority (NPA), Marina, Lagos, High Court Igbosere, Lagos, were all burnt, amongst other heinous crimes committed.

BORNO: ‘They Withdrew In Disarray Due To Superior Firepower From Troops’ — Army…