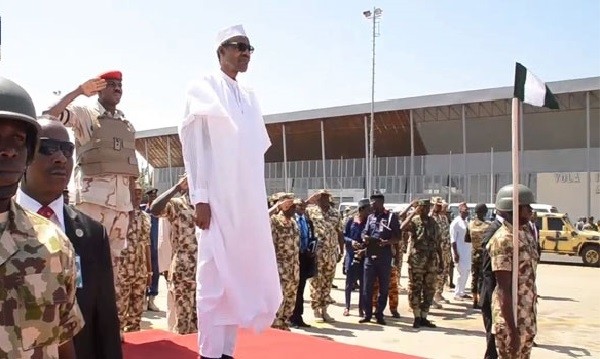 As part of ways to appreciate the contributions of the Nation’s living and fallen heroes, President Mohammadu Buhari has launched the 2016 Armed Forces Remembrance emblem with a donation of 10 million Naira.

The president who launched the emblem at the council chamber of the presidential Villa, on Monday in Abuja, said that Nigerians and visitors to the country may be required to wear the 2016 Armed Forces Remembrance Emblem, as pass for entry into all government establishments.

Buhari further noted that but for the efforts of the veterans, Nigeria as a country would have disintegrated.

Buhari said, “Today’s occasion reminds us of the need to appreciate the noble contributions of our fallen heroes who paid the supreme sacrifice to maintain national and international peace and security.

“Our nation has recently celebrated 55 years of political independence and continues to remain as one indivisible entity despite several grievous challenges.

“Since independence, Nigeria has witnessed a lot of internal strife, survived a civil war and has remained united.

Buhari To Submit 2023 Budget Proposal To NASS Next Month—Akabueze

“This feat achieved by the country is an eloquent testimony to the determination of our citizens to remain as one people.

“The sacrifices of our fallen heroes, heroines, and veterans who rose up to the security challenges cannot go un-noticed.”

President Buhari was decorated with the redesigned emblem, as the Grand Patron of the Nigerian Legion before the commencement of the remembrance ceremony for the fallen heroes.

Also present at the event were senior military officers, ministers, members of the diplomatic corps and other senior government officials.

The Armed Forces Remembrance Day celebration which began on November 11 would be concluded on January 15, 2016 with wreath laying by the military and Heads of the three arms of government – Executive, Legislature and Judiciary.

Paris Attacks Were Planned Through The PlayStation 4 Network – Belgian Minister