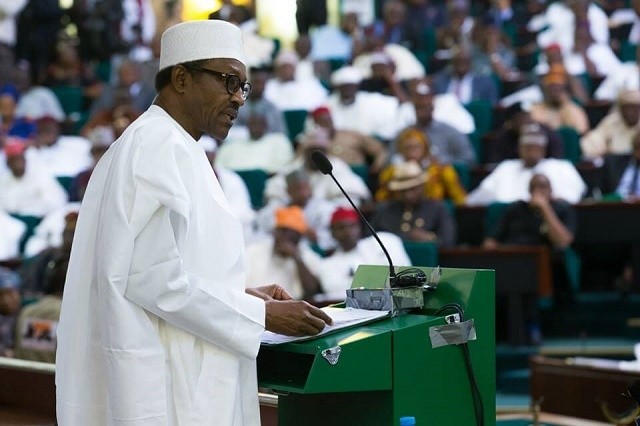 For a man who looks lanky, whose disposition portrays a man of stern leaning, and whose battle to wrestle power from the hands of its previous custodians has always been predicated on his personal life of frugality and asceticism, and a claim of wanting to extend those features to the country’s leadership via sensible governance based on probity, accountability and the need to cut waste, the nation is still at a loss to the kind of man President Buhari has become.

Both in his public and private engagements, one might confuse Buhari’s company with a-day-with-a-mute, except when corruption is brought up for discussion and analysis. Then you see a change in his countenance, his face becomes red. If he had been sitting, he would stand. His uneasiness each time corruption is hinted would make him want to grab his host to exorcise the disease of the heart from him.

That’s the Buhari Nigerians honoured with “FeBuhari” this time last year and a “March for Buhari” a month later. But it becomes evident that in less than a year since the president got a new home for himself, he seems consumed in the euphoria of the moment.

Look closely, something has changed.

And nothing epitomizes this than “The Budget of Change.”

As the name suggests, a change in a man whose budgets – for 73 years – had been frugal to that of a spendthrift, a change from asceticism to hedonism, from scantiness to lavishness, and from moderate to piggishness. With the Budget of Change, President Buhari appears to have fallen into the cesspit of the power condition whose victims – hitherto known for infective goodness and some iota of decency – leave the ditch forever battling with a messed-up, deformed and whitewashed reputation on their persons.

While presenting the document at a joint session of the House of Representatives and senate on December 22nd, President Buhari mounted the platform on the premise of change while at the same time defending opulence, waste, and his government’s unwillingness to break away from the shackle of the old order – reflective of an indigent personality who wakes up to find himself inside a cash vending machine.

A cursory look at the budget reveals stack similarities with those of previous administration; and a thorough one, would leave one with no iota of doubt that the Budget of Change is a fussy sham, a polished document of excessive and unacceptable duplications, a formal way of institutionalizing our maladies, and a document that bears similitude with a vehicle whose Ferrari body sits on a motorcycle propeller.

It was a spectacle of contradictions as the Nigerian people found it difficult balancing an equation where the president held the Nigerian Father Xmas, Sambo Dasuki and some previously notable Vagabonds in Power (VIP) in custody for the vicious looting of our commonwealth at the same time wanting to spend N322,421,971 to link a cable to the drivers’ restroom at the seat of government all in the name of ensuring “that our resources are managed prudently and utilized solely for the public good.”

In keeping with his tradition of ensuring “that resources are aligned with government’s priorities and allocated efficiently,” the development of the mental faculty of vice president would have to be placed above that of the nation. According to a report by Premium Times titled “Inside the massive fraud in Buhari’s 2016 budget,” the vice president would read more books than half of the nation’s federal polytechnics, ditto for every institution of learning in the country save two. As the second most powerful man in the country, the Budget of Change plans to counter his headaches and stomach pains with N7.54m aside the almost N4bn allocated to health equipment and supplies in the State House Medical Centre where the same vice president has unfettered access to.

It becomes apt to ask if an evil spirit was planted in the presidential villa by the Evil Genius whose fear makes every occupant of the property allot to its medical centre, drugs in quantities far greater than those in all hospitals across the country, and health equipment whose quality renders every single one in our health centres’ as mere mechanical devices.

While the people are left at the mercy of nature’s providence – the moon – to lit up the dark skies at night, the president would spend over N600m on the installation of electrical fittings on a property whose history of magnificence is echoed by the impossibility of knowing dusk from dawn, morning from afternoon, sunrise from sunset.

How else does one conceptualize the misery of the mysterious Budget of Change of Mr. Buhari who, in the build up to the 2015 elections was captured taking a sachet of milo but plans to eat, drink and take his desserts with an amount 733% more than that of his deputy? One wonders how long it would take for the president to drink N114,967,140 worth of 20g sachet of milo!

Nigerians have accepted all manner of ostentation and flamboyance from public officials but not at this time when the nation totters on the brink with at least twenty states finding it either difficult or impossible to pay a family man the minimum wage of N18,000.

And this is the gospel the president has to preach to himself, his party and his employees in this period when the country is consumed in a precarious situation with annihilatory poverty on one side and excruciating terrorism on the other.

With a nation so battered and shattered like ours, the several infelicities and insulting duplications that litter all over the so called Budget of Change would leave our country in a worse state than ever. The ascension of Mr. Buhari to the presidency like never before raised the hope of every hopeless citizen that at least with a non-thieving head, the Nigerian machine, hitherto characterized with motion without movement would begin a journey out of perdition.

But with each passing day, it looks as though the silent revolution is lost or what else is a budget that spends N2,469,986 daily on vehicles than an unfortunate process of wheel and deal?

President Buhari had better realise before its tool late that it would be counter-productive to betray his brothers. A brotherhood that was birthed –paraphrasing Malcolm X at the Militant Labour Forum – via oppression, exploitation, degradation, discrimination, segregation and humiliation meted on us by the Nigerian elites.

This budget as it stands, even after its alleged theft, withdrawal and replacement, deserves condemnation irrespective of one’s political leaning or ethnic affiliation for it encapsulates a tragic case of what Stokely Carmichael, in his condemnation of racial integration in the United States called “insidious subterfuge” surreptitiously aimed at selling us a “thalidomide drug” of change.

OPINION: Buhari Is A Blessing To One Nigeria