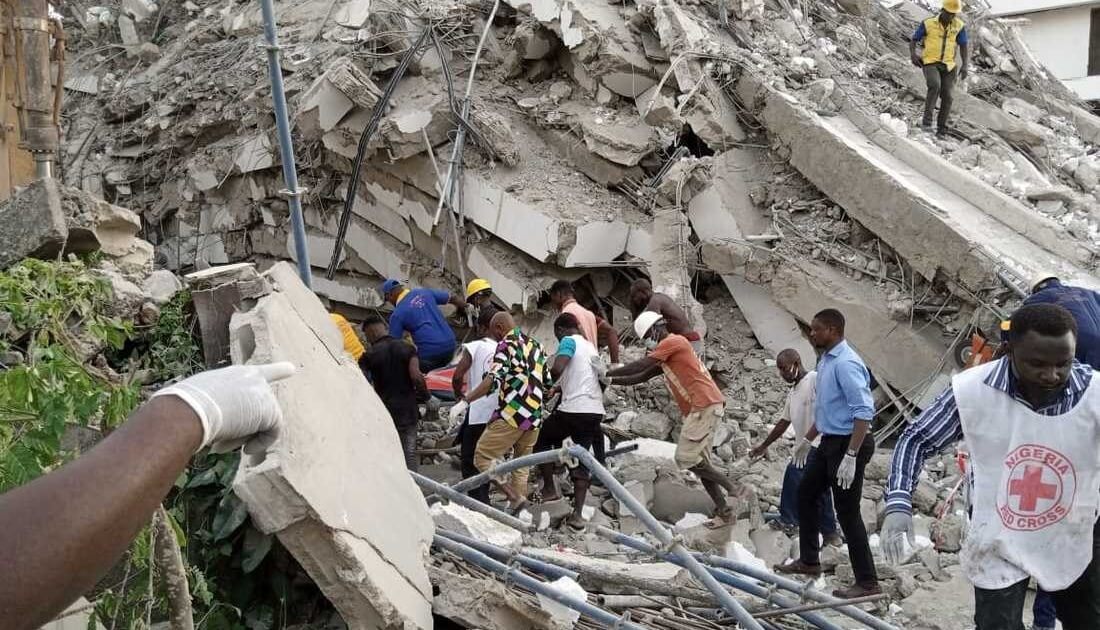 Lagos State Governor, Babajide Sanwo-Olu, has granted special access to a man whose son is presumed to be among victims of the 21-story building that collapsed on November 1, 2021 in the Ikoyi area of the state.

The man had broken down in tears while explaining his predicament to Governor Sanwo-Olu when he visited the scene of the building collapse on Thursday.

The man’s 17-year-old son, Emmanuel Abel, was reportedly among construction workers at the collapsed building located along Gerrard road in Ikoyi.

“I’ve been to the general hospitals to check those that are injured and my son was not found. You promised that I would be able to see my son today. I came from Abuja and waited till today,” the man, whose name was not given, said on Arise TV’s live coverage of Governor Sanwo-Olu’s visit.

He then broke down in tears, saying: “Can you please sir, grant me access to see those that have been recovered and that are dead? What I actually need now is to know if my son is living or dead, so that I can fall back to Abuja and wait for the state government to do the needful,” he said, adding “I am sincerely begging sir.”

Governor Sanwo-Olu had explained that it would be unprofessional for the state government to grant access to anyone demanding to inspect the corpses at this point, but said he would “do an exception” for the distraught man who came from Abuja after learning of what had happened.

The governor’s words: “I truly cannot express fully how difficult it would be for you. I remember that I saw you yesterday and I did mention that probably by today you might be able to see [your son]. So, two things will happen. We can first pick up your cost of staying here in Lagos to be able to get to see your son.

Governor Sanwo-Olu, however, said “We can have that exception for you and you could sit with the permanent secretary in the ministry of health. They will take you to a separate location and they can view with you the pictures of the corpses.

“Like I said, it is because we want to do the things properly and properly means let’s do it officially with the pathologist in the event that we need to present this case in a criminal case.”

The governor further clarified that contrary to reports that the death toll in the building collapse had risen to 36 or 30, only 32 deaths had been confirmed by the state’s ministry of health, while the number of survivors stood at nine.

“It is also important for me to mention…. I mentioned this yesterday and I am saying it again. Gentlemen of the press, this is a very very important assignment and you have the responsibility to adequately and transparently report what you know to your listeners or audience.

“I have seen in some new media this morning that 37, 36, 38 bodies have been recovered. These are not confirmed authoritative information. As we stand here and we speak, they have recovered a total of 32 bodies form this location and they’ve been transported to the morgue,” he said.

Anambra Election: We Didn’t Call For Boycott, We Asked People To Sit At Home For Kanu–IPOB