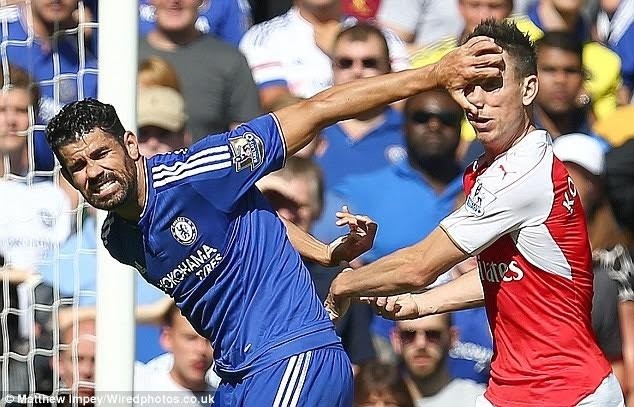 Chelsea striker, Diego Costa has been banned for three games after the FA’s independent regulatory commission found him guilty of violent conduct following his collision with Laurent Koscielny on Saturday.

Costa, 26, had put his hands in Koscielny’s face before clashing with Gabriel, who was sent off, but had a three game ban overturned by the FA on Tuesday.

Following the ban, Chelsea is furious with the decision and angry with referee Mike Dean, after he retrospectively claimed he would have sent off Costa for the 43rd-minute incident with Koscielny.

In a statement, Chelsea said they were disappointed with the verdict.

The statement reads: ‘We are extremely disappointed with the FA Regulatory Commission’s decision to suspend Diego Costa,’

‘We will await their written reasons before commenting further.’

Costa’s ban covers Chelsea’s League Cup match at Walsall on Wednesday along with Premier League matches against Newcastle and Southampton.

Having confirmed the match officials did not see the incident between Costa and Koscielny, the FA supplied video footage to a panel of three former elite referees.

Each had to independently rule Costa’s actions to be an instant red card for the FA to proceed with the charge.

However, Arsenal’s defender, Gabriel Paulista has been charged by the FA for violent conduct for failing to leave the pitch immediately after being sent off.

Arsenal and Chelsea have both been charged with failing to control their players and are anticipating sizeable fines from the FA.

All three parties have until 5:00 pm on Thursday to reply to those charges.

I Am The Most Qualified to Handle The Super Falcons – Danjuma

Amaechi Drags PDP, Others To Court, Demands N300bn For Damages