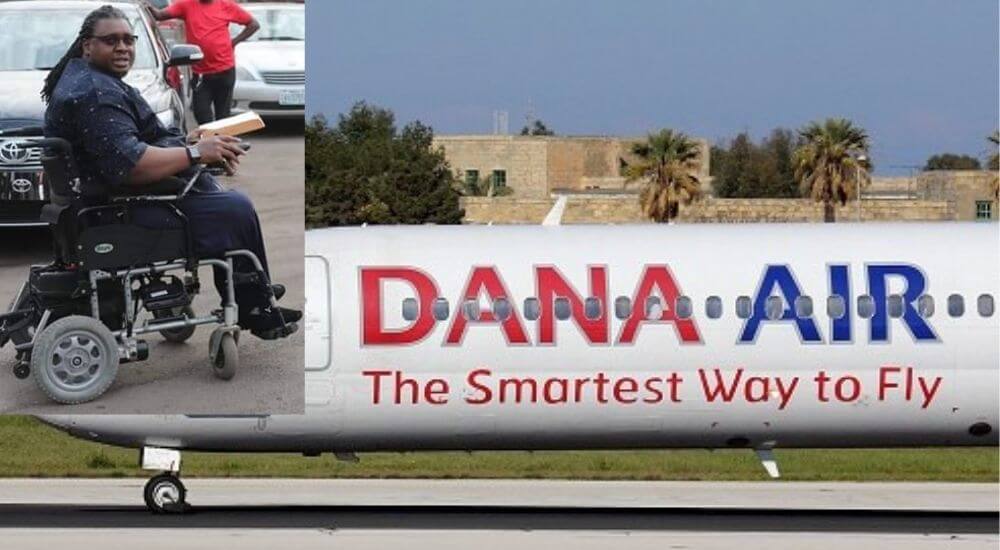 Dr Chike Okogwu, a passenger with disability who sued Dana Air for N1 billion over alleged discrimination, has announced plan to drop his suit against the airline.

Okogwu on Wednesday met with the Managing Director of the Federal Airports Authority of Nigeria (FAAN), Rabiu Yadudu, informing him of his decision to end his rift with the Dana Air management.

Honourable Miriam Onuoha, the Chairman House of Representatives Committee on Disabilities and Special Needs, led Okogwu and members of the Care Initiative, a non-governmental organization, on the visit to the FAAN MD.

Okogwu streamed the meeting live on his Facebook page.

“I want to make two personal requests on behalf of Care Initiative, one is the withdrawal of all hostilities. The airlines are not our enemies and we are not their enemies.

“I don’t enjoy going to court with them. I sued them for N1 billion and they sued me…I don’t think it is necessary. Can we have a peace meeting under you with DANA Air? We want to meet first with the authorities of DANA Air.

“DANA Air have been my friends. Chartered DANA airlines and that’s how close I am to them.

“So, I felt bad that I was treated that way….I am a person of peace, I’m not a war-war person. If that can be done, that would be very delightful.”

Responding, Yadudu pledged FAAN’s commitment to working with Okogwu and other Persons with Disabilities (PWD) in the country.

“I think what I would suggest would be that let the chairman of the PWDs chair the committee for the meeting and we are all committed to working with her and you,” he said.

Okogwu had in January reportedly sued Dana Air for “discriminatory and unprofessional conduct” after the airline allegedly prevented him from boarding its plane simply because he was in a wheelchair.

“This is indeed the height of discrimination against persons with disabilities in Nigeria. I booked a 7:20 PM flight from Abuja-Lagos which was rescheduled to 9:05 PM. I got my boarding pass only for Dana Air to say a new policy forbids carrying us with wheelchair,” he had said.

Okogwu had demanded N1bn damages from Dana Air on the grounds that the airline’s alleged discrimination against him worsened his underlying health conditions.

But the airline in turn accused Okogwu of being “troublesome” and described him as a “violent” passenger who attacked and injured a member of its staff because it took a positive action for his “safety”.

In a press release it issued on December 21, 2020, Dana Air claimed that its Duty Manager noticed Okogwu “in the midst of the upsurge of passengers (on Dec 20, 2020) , approached him and politely explained to him that as a matter of policy, comfort and safety of our guests, we do not carry Special Passengers at night while offering to check him in first, on the 7am flight the next day.”

The airline said Okogwu, “…blatantly refused the offer and went violent on the Duty Manager causing her injuries in the process. This same passenger also went further to destroy our check-in systems, chairs, Covid-19 Protective glass shields and weighing machines at our counter in Abuja.”