Confederations Cup Win Will Go Down In History – Joachim Low 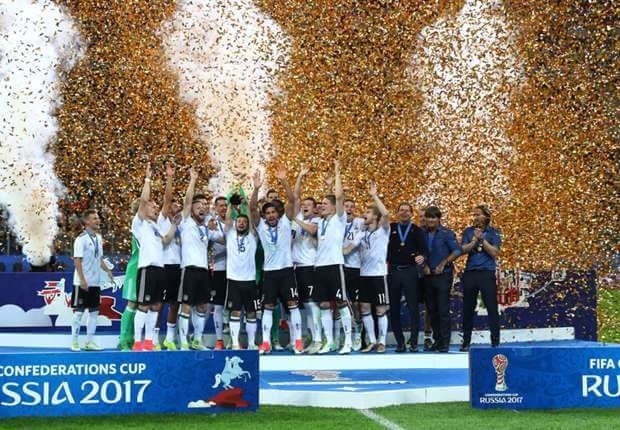 Germany coach Joachim Low has lauded his youthful side after beating favourites Chile in the FIFA Confederations Cup final to lift the trophy for the first time.

The 57-year-old said the feat would never be forgotten, as the youngsters have made their country proud.

A first-half goal from Lars Stindl saw the World Champions to a 1-0 win over Chile in Sunday’s final, at the Stadion Krestovskyi, Russia.

“It is worth a lot, because Germany has never won this trophy in our history,” he told a news conference.”So this team and this victory will go down in history. The team absolutely deserved it and that’s why we’re all super happy.

Bayern Munich midfielder Joshua Kimmich said the Germans have proved their doubters wrong as they came into the competition without their first team players.

“Myself and the team are all extremely proud of the title. Nobody really counted on us and we were able to beat great nations,” Kimmich said.

“You could see how much it meant to the Chileans as they were so sad in the end.

“We’ve had the better ending and it is amazing to get the cup with this squad. We will party hard.”

DMO: The Task Before The New DG

Security Agencies, Not NNPC Should Be Blamed For Crude Oil Theft—Asari-Dokubo