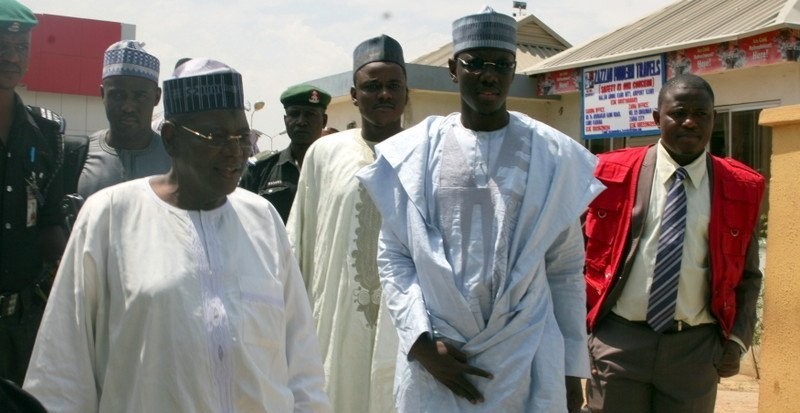 Ex-Governor of Jigawa State, Sule Lamido and his two sons in court over alleged N1.35bn fraud[/caption]

A Federal Court sitting in Kano State, Nigeria’s Northwest region has ordered a former Jigawa State govenor, Sule Lamido, his two sons, Aminu and Mustapha, who are accused of fraud, to be remanded in Kano prison custody till September 28.

The Economic and Financial Crimes Commission is accusing the four suspects of money laundering, amongst other charges.

In her ruling, Justice Evelyn Anyadike ordered that the four accused persons be remanded in a Kano prison custody till September 28, because the Economic and Financial Crimes Commission (EFCC) said they lacked enough facilities to accommodate them.

The judge rejected the pleas of defense Counsel, Senior Advocate of Nigeria, (SAN) Mr. Effiong Effiong, that the accused be kept at EFCC custody, stressing that the commission had complained of inadequate Facilities.

Mr. Effiong had earlier argued that remanding the accused persons in prison will amount to trampling on their fundamental human rights.

Ex-governor Sule Lamido, Aminu Sule Lamido, Mustapha Sule Lamido and one Aminu Wada Abubakar pleaded not guilty after a Twenty eight-count charge bordering on a number of alleged breach of trust was read to them.