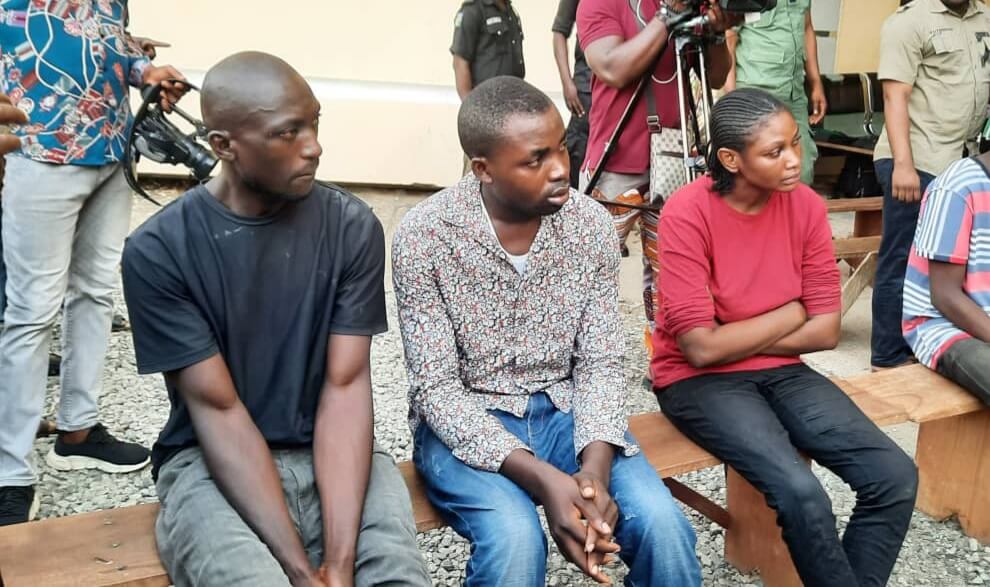 The commissioner disclosed this while parading three suspects: Jenifer Tsembe 26, Monday Simon (a.k.a Black) 36 and Solomon Abu 35 for their complicity in the death of the deceased who until her death resides in City Homes Estate Lokogoma with one Edward Achadu, her lover.

The police boss revealed that the suspects “criminally conspired and murdered the victim to separate her from Edward Achadu so that Jennifer Tsembe one of the suspects and an estranged lover of Edward could have him all to herself, especially for pecuniary benefits.”

Recall that the deceased left her residence with her one year, five-month-old son on April 14 and never returned home. A day later, the son was recovered at the Holy Trinity Catholic Church upon a call placed through to one of the paternal relatives.

Narrating her side of the story, Tsembe told THE WHISTLER she had no intention to kill her but to abduct her and demand ransom from Achadu, her lover. Speaking incoherently, Tsembe denied killing her but alleged the other male suspect, Solomon, initiated the plan of her abduction.

However, the other suspects confessed that Tsembe who is friends with the deceased had conceived the plan for the deceased to come to her house where she requested their help to tie her upon her arrival.

They alleged that after they had played their part, Tsembe instructed that they go away leaving the suspect, deceased and her child behind.

Speaking to journalists, Simon also known as Black said after he left, Tsembe had called him to say she needed help with the body because the deceased had died.

Black, however, confirmed that the suspect had already bathed her with “acid” by the time he had arrived.

THE WHISTLER sighted a scar on the inner side of Tsembe’s arm which she consciously covered. The police said it was a scar sustained from the corrosive substance she used on the deceased.

The Police commissioner, thereafter said the command has intensified investigation to reveal “groundbreaking facts that could lead to the arrest of fleeing participant(s) in this criminal act.

“The suspects will be charged to court upon the conclusion of the investigation,” Babaji said.

Woman Sleeps Under Tree With Five Children After Demolition In Abuja