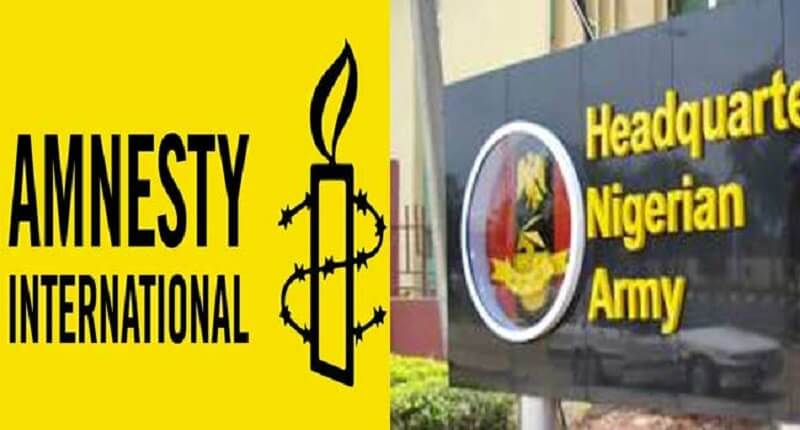 The Defence Headquarters (DHQ) on Friday condemned the report of Amnesty International (AI) which claimed the military engaged in forceful displacement and unlawful detention of villagers in its fight against insurgency in the North East, describing it as support for insurgency.

AI had earlier in the day alleged in its latest report that the Nigerian military burnt three villages and detained six men from the displaced villages at Maimalari military barracks in Maiduguri for about a month after which they were freed without any charge, thereby violating international humanitarian rights.

In a strongly worded statement issued by the Acting Director of Defence Information (DDI), Brig-Gen. Onyema Nwachukwu, who conveyed the position of the military, accused AI of supporting the violent activities of the Boko Haram as well as the Islamic State of West Africa Province (ISWAP) in the North East.

The military describes the human rights body’s report as a “campaign of calumny” designed to undermine the on-going counterterrorism and counter-insurgency operations in the region.

The statement reads briefly: “The Defence Headquarters (DHQ) has taken cognizance of yet another falsified report by Amnesty International (AI) in a campaign of calumny targeting the Nigerian Military and deliberately supporting the callous acts of terrorism perpetuated by Boko Haram Terrorists (BHTs) and Islamic State of West African Province (ISWAP)

“This inglorious campaign is contained in a recent report alleging employment of unlawful tactics of razing down villages and unlawful detention of locals by troops. This is line with the AIs usual mannerism and tenacious efforts aimed at disparaging the Armed Forces of Nigeria (AFN).

“The Defence Headquarters wishes to state unambiguously that the allegations being touted by AI are nothing but a betrayal of its lack of in-depth knowledge of the goings-on in the North East (NE) theatre of operation. It is expedient to state that troops of Operation Lafiya Dole who are conducting Counter Terrorism and Counter Insurgency Operations in the NE do not employ arson as an operational tactic. It is a well-known fact, going by the modus operandi of BHTs that they, have more often than not engaged in the atrocious acts of looting and burning of villages, as well as destroying infrastructures.

“It therefore, beats one’s imagination that AI is attributing these atrocities to AFN troops who are legitimately defending the country guided by extant rules of engagement and operational codes of conduct.”