Documentary On How Buhari, Others Joined NLC Protests Against Jonathan Set For Release – Ayuba Wabba 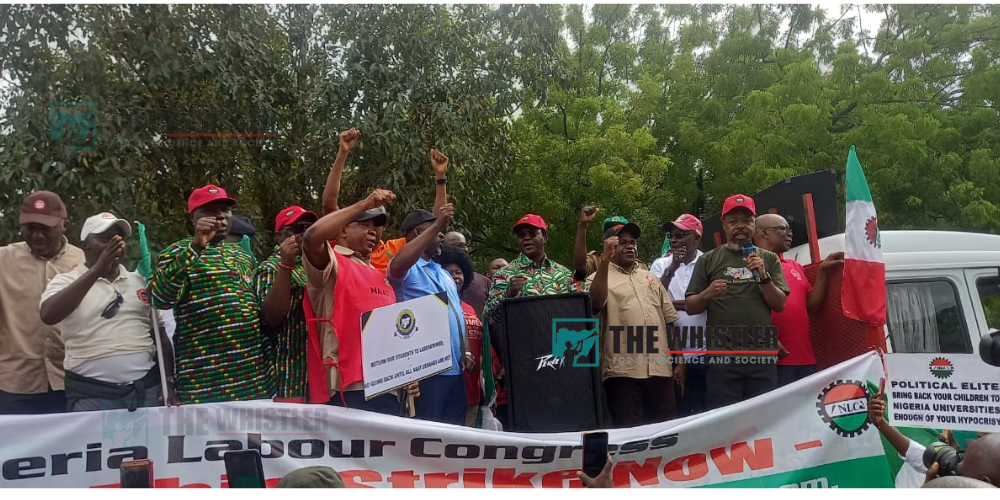 The National President of the Nigeria Labour Congress (NLC), Ayuba Wabba, has revealed that the union plans to release a documentary to mark its 40th anniversary.

The documentary will, among other things, show how officials in President Muhammadu Buhari’s government participated in protests against past administrations.

Wabba disclosed this on Wednesday in Abuja during the NLC’s ongoing protest against the government’s failure to address the Academic Staff Union of Universities (ASUU) strike which started on February 14th, 2022.

The union organized the two-day protest (26th and 27th) in solidarity with ASUU, to compel the government to address the issues.

THE WHISTLER observed heavy presence of policemen and officers of the Nigerian Security and Civil Defence Corps (NSCDC) deployed as the protesters first occupied the Unity Fountain before moving to the Ministry of Justice and the National Assembly.

They carried placards with inscriptions such as ‘The poor deserve quality education’, and ‘no selective treatment of University workers’, among others.

“This is the beginning of the struggle, they should get ready. If they are ready to address the issue, then good for them. Three sets of university students are yet to get admission,” Wabba said.

“Democracy is about the people. The point must be made very clear, this is just the beginning and all of you must be ready. All unions have issues, not just monetary but policy issues. It has been promises and promises but not yet fulfilled.

“They are saying we are a threat to security. It is their actions that are threats to democracy. All over the world nobody’s right to protest has been annihilated

“The documentary of NLC at 40 will be launched and you will see all of them in power who joined us during the previous protest against previous administrations.

“They shamelessly deployed no work no pay. We commend governors who still pay State University workers

“We are tired of excuses, lamentations the second phase is the three-day national strike

“We will not allow few politicians to destroy the futures of millions of Nigerians.”

Wabba said the second phase of the protest will be 3-day national strike as they won’t allow the political elites to destroy the future of millions of Nigerians.

JUST-IN: Naira Depreciates To All-Time Low Of N710 To Dollar