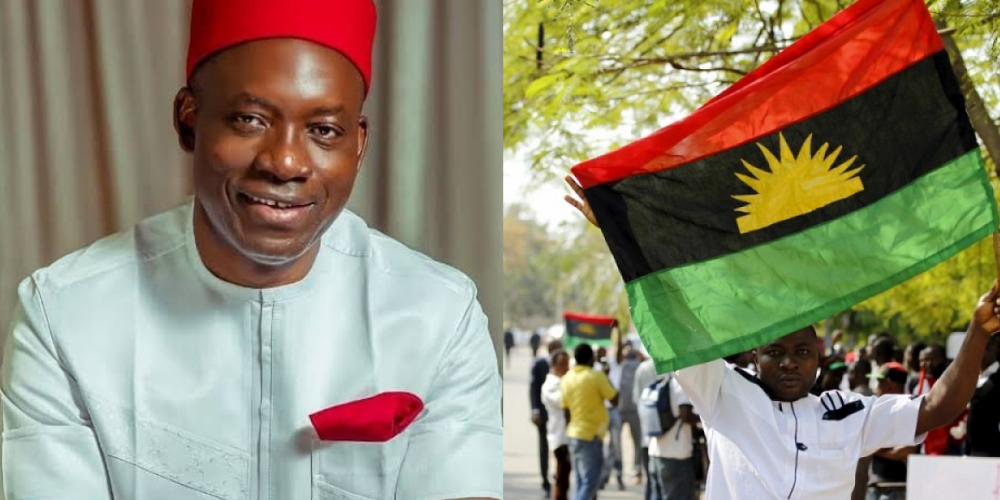 Emma Powerful, IPOB’s spokesman, stated this in a statement.

According to him, “We the Indigenous People of Biafra, IPOB, under the leadership of Mazi Nnamdi Kanu, wish to tell Governor Soludo to stop linking IPOB with criminal activities in his state without proper investigations.

“He should know that our enemies are committing atrocities using our name in their desperation to blackmail IPOB.

“Again, we want to advise Soludo to stop asking ESN to come out from the bushes and forests without providing an alternative solution to checkmate the activities of fulani terrorists in our farms and forests.

“It is dangerous to leave our farms unguarded to avoid the Fulani jihadists masquerading as herdsmen manhandling our mothers, wives and sisters who go to farms. Anybody who knows Soludo should advise him to leave IPOB alone and stop making unguarded utterances against IPOB again without investigations”.

Powerful said the Monday sit-at-home order was not being enforced by his group.

Quoting him, “Importantly, those carrying out threats against people’s lives because of non-existent Monday sit-at-home are criminals, kidnappers and robbers.

“These people disturbing the peace of our people are not IPOB members. They should be treated as criminals. IPOB doesn’t shed blood. We are a peaceful movement.

“Anyone caught adding to the pain of our people in the name of enforcing Monday sit-at-home order will be treated like the enemy that he or she is.

“We, therefore, warn these agents of darkness using the name of IPOB to enforce a non-existent sit-at-home to desist because if we lay hold on them.

“Why should such unpatriotic elements be inflicting pains on our people and dragging our image to the mud?

“IPOB remains a non-violent movement, and our peaceful approach for Biafra restoration has not changed.

“Nobody was given the mandate to enforce the same suspended sit-at-home using the name of IPOB.

“The only day sit-at-home will be observed in Biafraland is when our leader Mazi Nnamdi Kanu is appearing in court, and we shall as usual make it public for all to know.

“We hereby direct community leaders, market leaders, church leaders, and other institutions of authority in Biafra land to arrest any hoodlum trying to enforce any sit-at-home on Mondays and hand them over to IPOB.

“Such criminal elements must be treated in a language they understand. Again it has become imparative to state that IPOB led by Mazi Nnamdi Kanu has nothing whatsoever to do with the recent attack on Nnewi South headquarters.”

Saraki Urges Muslims To Pray For Nigeria During Ramadan

Anambra Hotel Shut Down Over Amorous Viral Video Of Students