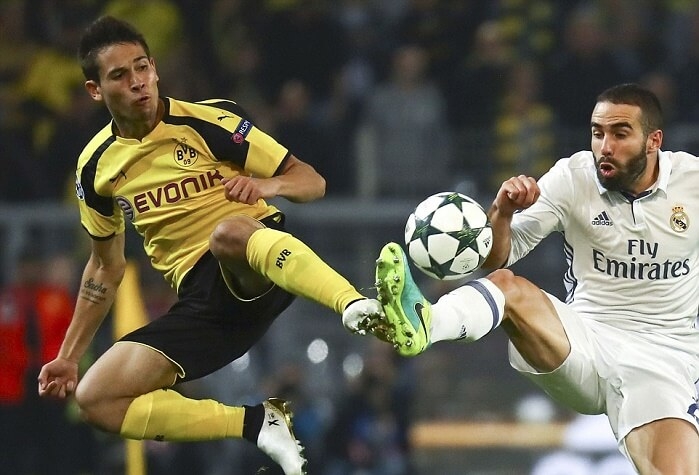 Marco Reus marked his Dortmund return with a late equalizer against Real Madrid, also scoring the club’s 21st goal of the group stage – a new Champions League record. Leverkusen cruised to a 3-0 win against Monaco.

Dortmund traveled to Madrid with the pressure off, but group victory up for grabs if they could secure a point or more. For much of the entertaining and exciting game, Real appeared to be in the driving seat.

Both sides were generating chances, but Karim Benzema was on hand to complete a pair for the hosts before an hour was played. In the first half, he connected with a low cross from Dani Carvajal that put Roman Weidenfeller in a horrible position between Dortmund’s posts. Club hero Weidenfeller elected to dive for it, ultimately leaving Benzema to tap home.

After the break, Benzema was recipient of an even better delivery, an inswinging left-footed peach of a cross from James Rodriguez. Benzema headed that ball, which might as well have been dropped on his dome, between Weidenfeller’s legs to double the lead. Benzema now has 50 career goals in the Champions League – equaling Thierry Henry’s tally – more than any active players bar Ronaldo and Lionel Messi.

Dortmund, meanwhile, were watching many promising attacks break down in the final third. Both Andre Schürrle and Ousmane Dembele had stints trying to play off lone striker Aubameyang, while starter Christian Pulisic had a quiet night on the flank.

Around the hour mark, though, Dortmund pulled back within reach courtesy of Pierre-Emerick Aubameyang. Immediately thereafter, Marco Reus replaced Schürrle and Emre Mor came on for Pulisic, presaging Dortmund’s best period of play.

In a wild closing phase to the game, during which Benzema had a shot at his hat trick and Cristiano Ronaldo hit the post, it was Marco Reus who scored the last of the night, connecting with a low delivery from Aubameyang that put Navas in the sort of compromised position Weidenfeller would have recalled from the first half.

Dortmund broke a record with Reus’s goal. It was BVB’s 21st of the group stages – the most by any side in Champions League history. Past scorers of 20 in the group campaign were Manchester United (1998-99), Barcelona (2011-12), Real Madrid (2013-14) and Barcelona this season, thanks to their four against Gladbach on Tuesday night.

Leverkusen also knew they would reach the latter stages of the competition regardless of Wednesday’s outcome.

Playing a strong side nevertheless, the hosts shocked in-form Monaco with a goal from the least likely source after half an hour. Holding midfielder Vladlen Yurchenko let rip from range with his right, guiding the ball to the top-right corner for his first goal Champions League goal in his first start in the competition.

Julian Brandt virtually finished off the game moments after the restart, combining down the left channel in a one-two with Hakan Calhanoglu. A sizeable deflection also played a key role in seeing the ball past the keeper and into the net for Brandt’s first goal in Europe’s top club competition.

And late on, Leverkusen were handed a chance to lift their penalty-spot curse. Left-back Wendell stepped up, seeking to score the club’s first of the season from the spot. The good news, it went in. The bad news? It goes down as an own goal. Wendell rattled the crossbar and the ball was bouncing back away from goal, before striking Morgan de Sanctis’ back and dribbling back across the goal line. Now, the question is whether that constitutes good or bad luck for Leverkusen from 11 yards.
Other Champions League results, December 7:

2019: All Eyes On Saraki Over Emergence Of A ‘New Mega Party’