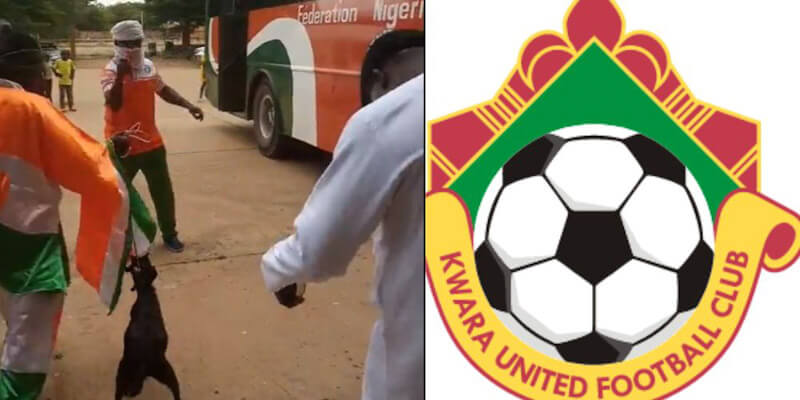 134
SHARES
ShareTweetSubscribe
#mc_embed_signup{background:#fff; clear:left; font:14px Helvetica,Arial,sans-serif; width:90%;} /* Add your own Mailchimp form style overrides in your site stylesheet or in this style block. We recommend moving this block and the preceding CSS link to the HEAD of your HTML file. */ (function($) {window.fnames = new Array(); window.ftypes = new Array();fnames[0]='EMAIL';ftypes[0]='email';fnames[1]='FNAME';ftypes[1]='text';fnames[2]='LNAME';ftypes[2]='text';}(jQuery));var $mcj = jQuery.noConflict(true);

A mild drama ensued on Sunday in Niamey as a herbalist poured blood on Kwara United FC players ahead of their second leg confederation cup match with AS Douanes FC.

Kwara United side had won the first leg of the clash by three goals to nil at the Mobolaji Jonhson Arena in Ilorin, the Kwara State capital.

The second leg which was to hold at the Senyi Kountche stadium in Niamey, however, took a dramatic turn when a herbalist was captured on camera pouring blood on the players and in the team bus as they alighted.

The herbalist’s accomplice also held a black goat and both were dressed in Nigerien colours with their faces covered with a turban.

The video which was shared on the verified Twitter handle of Kwara United FC, showed the chairman of the club Kumbi Titiloye, instructing the players to return to the team bus insisting that the team is not going to play.

“#CAFCC happening now! AS Douanes hired herbalists poured blood on Kwara United FC players as they are about entering the field. The two herbalists, one with keg of blood & the other with goat performed the act when the players are coming down from the bus. NO single policeman,” the Nigerian club tweeted.

The match which was eventually played after the initial delay ended in a goalless draw with Kwara United qualifying for the second round of the CAF Confederation Cup by 3 aggregate goals.

BBNaija: Evicted Allysyn Wants To Wait For End Of Show To Decide On Her Relationship With Hermes, Adekunle