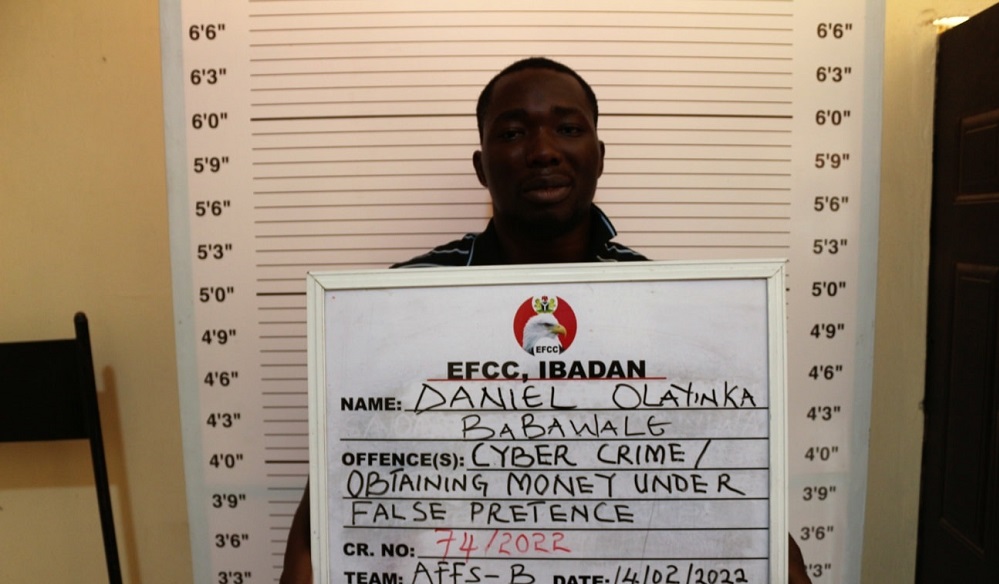 The Ibadan Zonal Command of the Economic and Financial Crimes Commission, EFCC, has arraigned
one Babawale Daniel Olayinka before Justice Uche Agomoh of the Federal High Court sitting in Ibadan, Oyo State, on five counts bordering on cybercrime.

The Head, Media and Publicity, Wilson Uwujaren, said this in a statement on Monday.

He said an identity card recovered from the defendant at the point of arrest on February 11, 2022, introduced him as a “personal assistant to the Oyo State Governor on Media Matters.”

The anti-graft agency said the defendant was arrested alongside 25 others at Soka area of Ibadan, Oyo State.

Count one of the charge reads, “That you, Babawale Daniel Olayinka on 23rd of December, 2021, within the jurisdiction of this honourable court, not being a visa card issuer nor an authorized agent of Visa Card sold four Visa Debit Cards on Tiger Company Group via Telegram to another person who is neither the issuer nor the authorized agent of the issuer of the said card and thereby commit an offence contrary to Section 35 of the Cybercrime (Prohibition, Prevention, etc.)  Act and punishable under the same Section.”

Another count reads: “That you, Babawale Daniel Olayinka between the 11th of February and 21st March, 2022 at Ibadan, within the jurisdiction of this Honourable Court, did make false statements to Chinedu Eneanya and his team, who are Officers of the Economic and Financial Crimes Commission, about the Identity Card of the Oyo State Government found in your possession, contrary to Section 39 (2) (a) and punishable under Section 39 (2) (b) of the Economic and Financial Crimes Commission Establishment Act, 2004.”

The defendant pleaded ‘not guilty’ to the charges filed against him by the EFCC.

Consequent, the prosecution counsel, Abdulrasheed Suleiman, asked the court for a trial date and remand the defendant in the Correctional Centre pending the determination of the case.

Counsel to the defendant, Mukhtar Aderogba and Nurullah Musa informed the court that application for the bail of their client had been filed and served on both the prosecution and the court. They asked that their client be admitted to bail.

The defendant was remanded in the Correctional Centre pending the perfection of his bail conditions.
The matter was adjourned till October 5, 2022 for the commencement of trial.