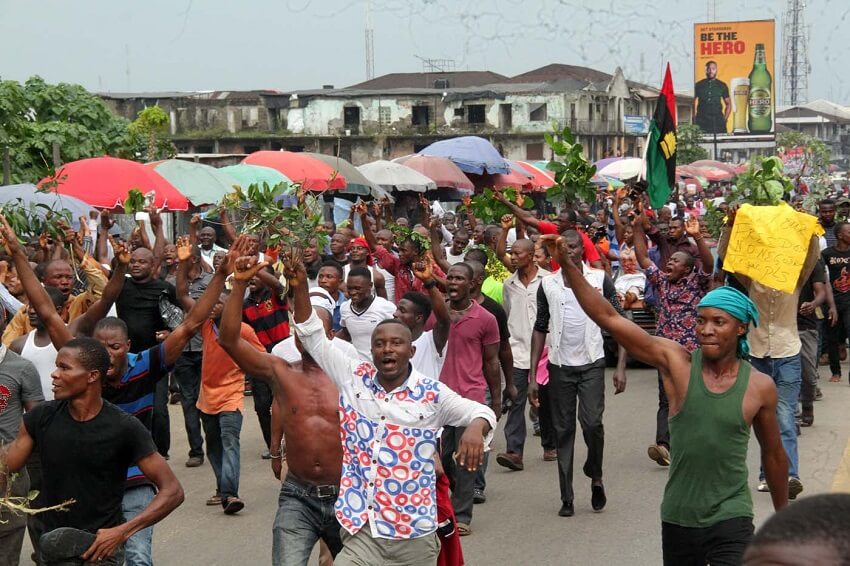 The tide is set to turn in the South East on the Indigenous People of Biafra (IPOB) and other pro-Biafra splinter groups who have capitalized on the current situation in the zone to target leaders, especially political and traditional leaders.

There is apprehension among the political class in the zone that IPOB leaders have hatched a plot to eliminate them, especially those perceived to be against their activities or against the emergence of Biafra Republic from Nigeria.

A top politician in  the zone revealed to THE WHISTLER that they are aware that IPOB leaders were behind the killings happening in Igboland and they would not fold their arms and allow them to kill everybody.

He said while they all support the idea of Biafra and are against marginalization of the south east, they would not support any reign of violence and bloodshed in their homeland.

He said, “Look, we’re aware that IPOB leaders are targeting political and traditional leaders they perceive are against them; they’re killing people.

“There’s now a consensus among the political elite that we cannot allow these people to just kill us; we have to fight back. We can’t just fold our arms to be killed. We will now also go after their leaders since we know them and where they are hiding.”

According to the politician who doesn’t want to be named, relatives of some of the people that had been killed in the south east have found out that the killers were members of IPOB.

He revealed further that IPOB has broken into several other groups with different leaders who are now killing, not just for their Biafra ideology, but even as mercenaries.

Several high profile persons in the zone had been killed, with the most prominent being the widower of late Dora Akunyili, former Director General of the National Agency for Food and Drug Administration and Control (NAFDAC), Chike Akunyili, who was shot inside his vehicle in Anambra State on September 29.

This awareness, coupled with reports of the existence of  IPOB’s “Killer Squad” hunting for adversarial members of the elite in the zone, has heightened anxiety among leaders of Ndigbo.

Traditional rulers, politicians and priests had also been targeted and killed by a killer squad said to have been created by the group.

IPOB was set up by Nnamdi Kanu, a British Nigerian, in 2012 as a Biafra independence movement. While it claims it would pursue its agenda through peaceful means, its modus operandi seemed to have changed after the arrest and arraignment of its leader in 2017.

Since then, and most especially since 2020, a violent campaign against security facilities and personnel has been waged in the south east.

The violence were usually  attributed to unknown gunmen by the group, but security agencies, especially the police, have accused IPOB of carrying out the arson and murder through the Eastern Security Network(ESN) established by the group in December 2020.

Now it is believed that the ESN, which initially said it was set up to protect  the people against murderous herdsmen, has transformed into a killer squad trying to silence the elite in the zone.

The bestiality of the group is so well known that most politicians or other leaders opposed to the operations of the group are afraid to go home because they know they would be targeted for elimination.

“So, the leaders are saying that why should killers be walking free? It is wrong and now we’re ready to kill them too,” confirmed a senior party leader in Anambra State.

Instead of living in fear of the unknown, the leaders are now resolved to fight to take back the region from violent pro-Biafra groups.

Rivers Not At War With Federal Government Over VAT – Wike