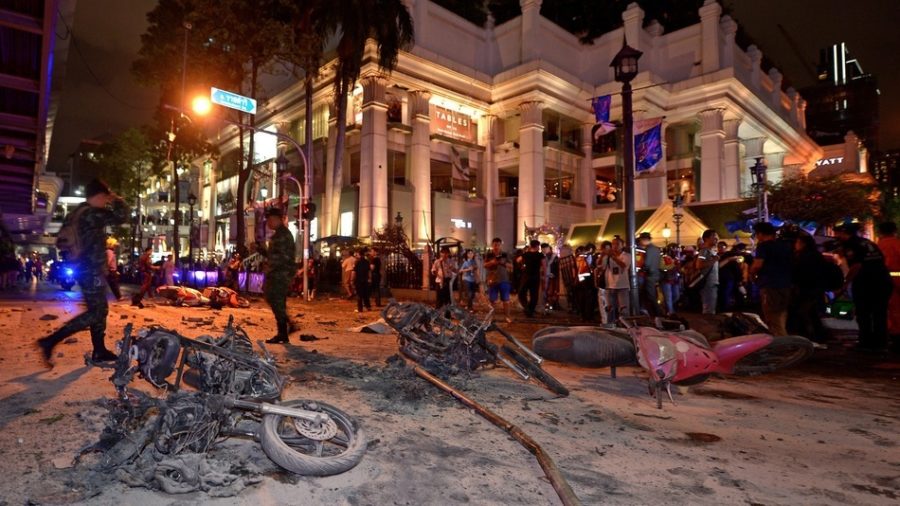 Thai police inspect the scene after a bomb exploded outside a religious shrine in central Bangkok late on Aug. 17, 2015.[/caption]

Thai officials say a bomb went off in a major intersection in central Bangkok on Monday evening, leaving at least a dozen people dead and scores more injured.

The explosion took place around 7 p.m. local time at the Erawan Shrine in the Ratchaprasong neighborhood of Bangkok, which is a popular area for tourists and home to luxury hotels and high-end shopping.

Speaking during a press briefing about two hours after the bombing, Thailand’s national police chief Gen. Somyot Poompanmoung said at least 16 people had been killed and 81 others were being treated in local hospitals. He also said one Filipino and one Chinese national are among the dead.

Reporters and bystanders at the scene described debris and body parts strewn across the intersection. Steve Herman, Voice of America (VOA) Southeast Asia Bureau Chief and Correspondent, was among the first reporter at the scene. He described seeing many of the injured removed from the scene by emergency responders.

“We had been able to to hear the blast from VOA borough less than half-mile away,” Herman told Mashable. “By the time we got there, there were about six bodies in the shrine that had been covered with white cloth and there was one body directly outside it.”

Herman said that based on what he saw, it seemed the bomb was intended to target as many people as possible.

“We were there before anything was cordoned off, before they started expressing alarm that there may be further time bombs. We found an electronic circuit sitting in the intersection, indication this was some sophistication,” said Herman. ” It didn’t bring down any buildings, but definitely was intended to kill a significant number of people. Anyone would have known there would be dozens if not hundreds of people at this shrine.”

Several bodies were seen covered by sheets in photos of the aftermath. Emergency workers tried to clear the area, warning that more explosions may be imminent, while a chaotic scene unfolded.

Charred motorbikes and injured victims could be seen in photos of the aftermath.

“In the line of that blast were several motorcycles knocked over in the intersection, nobody around them, about two of them were totally charred,” said Herman. “It would have been obvious that anyone who was riding those things were killed.”

While the investigation into the bombing has just begun, Defense Minister Prawit Wongsuwan speculated that it may have been meant to harm Thailand’s economy.

“The perpetrators intended to destroy the economy and tourism because the incident occurred in the heart of the tourism district,” Prawit told Reuters.

Local news outlet Nation TV reported that additional bombs were found at the scene of the blast, but the information has yet to be confirmed by officials.

The explosion happened in the Rajprasong intersection, which has been at the center of political demonstrations in the past.

Thailand’s capital has been relatively peaceful since a military coup ousted a civilian government in May last year after several months of sometime violent political protests against the previous government. However, there has been some tension in recent months as the ruling junta has made clear it may not hold elections until 2017 and wants a constitution that will allow some type of emergency rule to take the place of an elected government.

Car bombs are almost unknown in Bangkok, but have been used in southern Thailand, where a Muslim separatist insurgency has been flaring for several years.

Credit (Mashable, Some information from the Associated Press were used in this report) The Whistler