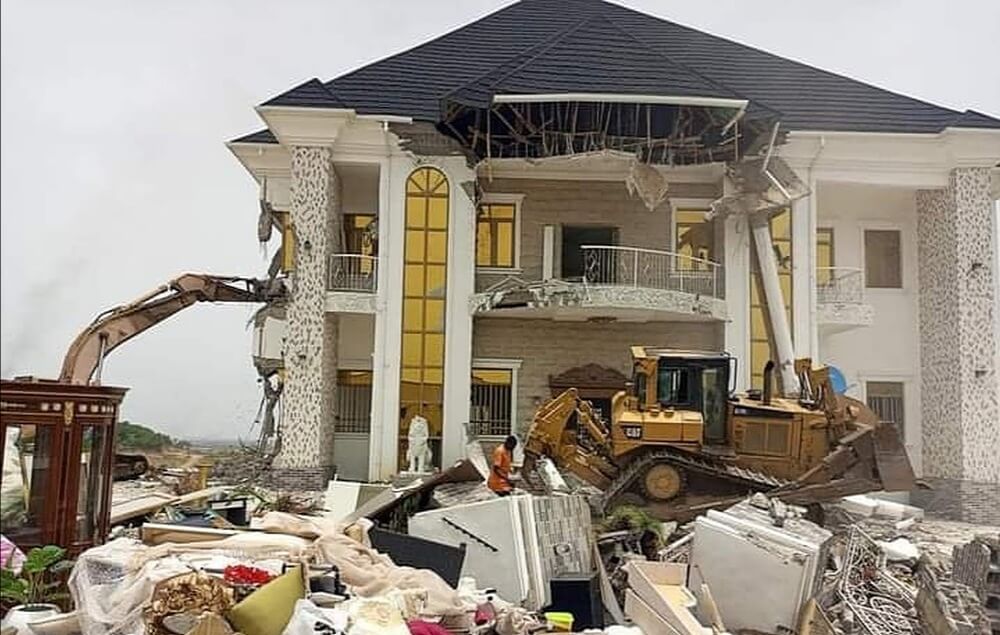 Levinus made the claim in an interview with THE WHISTLER when the group led a protest to the Federal Capital Territory Administration office on Tuesday in Abuja.

The group had demanded that Kpokpogri be compensated by the government after the demolition of his house said to be worth N700 million.

Levinus said contrary to claims by the FCDA and Federal Housing Authority (FHA), Kpokpogri’s house wasn’t built on land reserved for the construction of a ‘Superhighway’.

“We learnt that it was not his house that was on the proposed highway, and there are other lands that have been allocated to some persons in that area.”

The chairman revealed that when the officials of FCDA first visited the site, they brought a letter and the plot number on it wasn’t the same as Kpokpogri’s plot number.

He claimed that after Kpokpogri’s house was marked for demolition by the FCDA, he told them to erase the sign since his house was wrongly marked, and that he was waiting to get feedback from the FCDA which never came.

The FCDA and FHA had earlier claimed that three ‘stop work’ orders were issued to Kpokpogri while he was constructing the building but that he allegedly defied them.

But Levinus said, “This is a clear case of intimidation and oppression from our so-called political leaders. If his house was actually on the highway, there should be other houses that should also face the same demolition charges. Unfortunately, it was only his house. Does it mean the road started and ended in his house?” he quizzed.

In a petition they directed to the FCTA Permanent Secretary seeking immediate compensation for Kpokpogri, the group warned that failure to do so within seven days will leave them with no choice but to shut down the whole FCDA offices.

Levinus added that Kpokpogri will be seeking legal redress if nothing was done to their request.

The Organizing Secretary of the “Everybody Must Serve Movement”, Ibrahim Abubakar, also told THE WHISTLER during the protest: “Kpokpogri has been intimidated because he’s not a northerner, If he was a northern man, his building would have still been standing. Perhaps all the northern brothers will talk it out.

“In the course of our investigation, we discovered that the road started from a governor’s house and his house wasn’t demolished. The plot number that was marked for demolition was carrying a different number from Kpokpogri’s own.

“Notwithstanding, when they visited, that his house was marked and Kpokpogri went to the FCDA and they told him that the road never passed through his house. The engineers in charge of the highway came there to monitor the road and they showed him the area where the highway started and ended.”

He also claimed that one Kpokpogri’s worker is currently admitted at the Guzape General Hospital because the building collapsed and he was inside.

He added that the “government should do the right thing fast. We the Northern youths have chosen to stand against oppression and injustice to correct that narrative that the North are intimidating people. We are only demanding justice, truth, and equity but the elders of the north chose to spoil the narrative of the younger youths, we bow to superior knowledge and ideology but not to any form of oppression, ” he said.

We Can’t Feed Our Families Anymore, Traders Plead With FCDA Over Market Closure