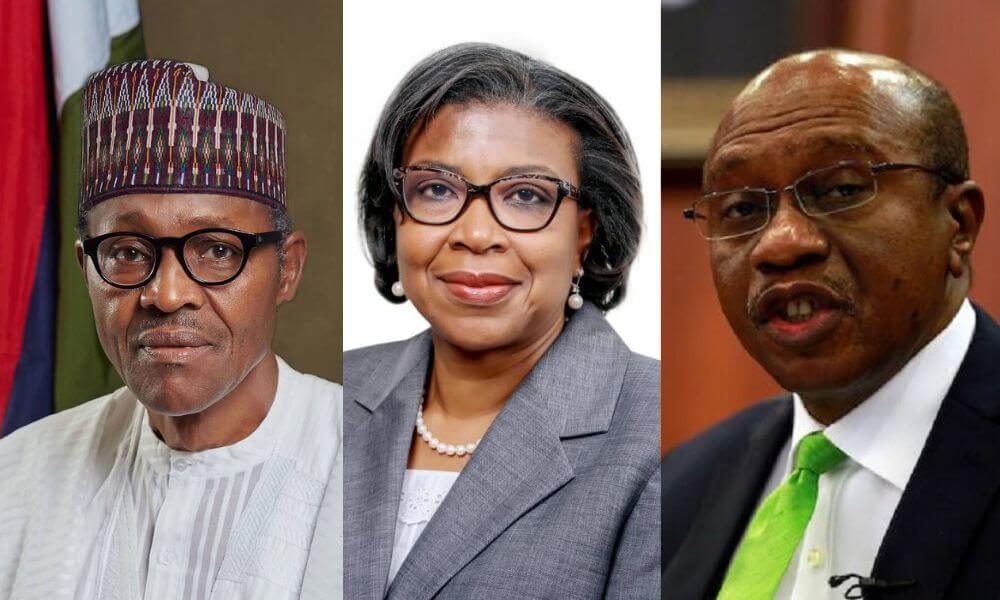 Nigeria’s total debt is now in excess of N61tn; analysis of data available to THE WHISTLER has shown.

Statistics obtained from the Debt Management Office on Monday showed that the country’s public debt stood at N41.6tn as of March 31.

Additional figures obtained from the Central Bank of Nigeria showed that the Federal Government is indebted to the apex bank to the tune of N19.91tn.

The Federal Government borrows money from the CBN through Ways and Means Advances to finance budget deficits.

Thus, Nigeria’s total debt and the money borrowed from the apex bank add up to N61.51tn.

Findings show that the borrowings from the CBN are in contravention of the CBN Act which prescribes that the Federal Government should liquidate its debt with the apex bank before embarking on fresh borrowings.

However, the Federal Government has consistently failed to liquidate its debt with the lender of the last resort but has continuously borrowed from it.

The apex bank, on the other hand, has failed to exercise its power to decline lending to the Federal Government as the Act empowers it to do.

Further investigation showed that the Ways and Means Advances debt ballooned to unprecedented proportions during the tenure of President Muhammadu Buhari.

The Federal Government’s borrowings from the bank as of June 2015 stood at N648.26bn. This was a month after Buhari came to power. Recall tha Buhari took over the reign of government from President Goodluck Jonathan on May 29, 2015.

However, as of June this year, the Ways and Means Advances to the Federal Government had ballooned to N19.91tn.

This means that within a period of seven years, Buhari borrowed N19.90tn from the CBN. This shows 3,070.29 per cent increase in ways and means financing within a seven-year period under Buhari.

Section 38 of the CBN Act, 2007 stipulates that the outstanding advances to the government at any point in time should not exceed five per cent of the previous year’s actual revenue.

It also empowers the apex bank to decline providing further advances should the Federal Government fail to repay the outstanding loans.

The CBN Act said, “The total amount of such advances outstanding shall not at any time exceed five per cent of the previous year’s actual revenue of the Federal Government.

“All advances shall be repaid as soon as possible and shall, in any event, be repayable by the end of the Federal Government financial year in which they are granted and if such advances remain unpaid at the end of the year, the power of the bank to grant such further advances in any subsequent year shall not be exercisable, unless the outstanding advances have been repaid.”

The Ministry of Finance had disclosed that the Federal Government revenue for 2020 stood at N3.9tn, N1.46tn lower than the N5.36tn targeted by the government.

Between January and November 2021, a total of N5.51tn revenue accrued to the Federal Government. This is N2.62tn lower than the N8.13tn which the government had hoped to achieve.

Thus, the Federal Government has not kept faith with the CBN Act which stipulated that the outstanding Ways and Means Advances at any point in time should not exceed five per cent of the previous year’s revenue.

By the end of December 2021, the total indebtedness of the Federal Government to the apex bank had jumped to N17.46tn, rising further to N19.91tn in the first six months of 2022.

Obaseki had said, “When we got to FAAC (Federal Accounts Allocation Committee) for March, the Federal Government printed additional N50-N60bn to top up for us to share.

“This April, we will go to Abuja and share. By the end of this year, our total borrowing is going to be within N15-N16tn. Imagine a family that is just borrowing without any means to pay back and nobody is looking at that, everybody is looking at 2023.

“Nigeria has changed. The economy of Nigeria is not the same again whether we like it or not. Since the civil war, we have been managing; saying money is not our problem as long as we are pumping crude oil every day.”

The governor continued, “So we have run a very strange economy and strange presidential system where the local, state and federal governments, at the end of the month, go and earn salary. We are the only country in the world that does that.

“Everywhere else, government relies on the people to produce taxes and that is what they use to run the local government, state and the federation.

“But with the way we run Nigeria, the country can go to sleep. At the end of the month, we just go to Abuja, collect money and we come back to spend. We are in trouble, huge financial trouble.”

Apart from the Ways and Means financing, Nigeria’s total public debt stood at N41.6tn as of March 31, according to statistics released by the Debt Management Office in June.

Disaggregation of the figure showed that the Federal Government’s domestic debt accounted for N20.14tn or 48.42 per cent of the nation’s total public debt.

The domestic debt of subnational governments made up of 36 states of the federation and the Federal Capital Territory accounted for N4.84tn or 11.64 per cent.

The external debt accounted for N16.62tn or 39.94 per cent of the nation’s debt burden. Although the DMO did not distinguish between states’ and federal government’s external liabilities, by tradition, most of the foreign debts were contracted by the Federal Government.

As of June 30, 2015, about a month after the inauguration of the present administration led by President Muhammadu Buhari, Nigeria’s total debt stood at N12.12tn.

This means that within a period of seven years, the country’s debt profile, without the CBN ways and means advances, has risen by N29.48 per cent or 243.23 per cent.

Director General at DMO, Patience Oniha, had in 2021 hinted at plans to include Ways and Means Advances as part of the national debt. However, as of time of filing this report, this plan has not been actualised.

If it had happened, the country’s debt portfolio would be as high as N61.51tn. Again, this would exclude debts owed to contractors who have delivered jobs ordered for by the government.

In 2020, for instance, servicing of Federal Government domestic debt gulped a total of N1.85tn.

Similarly, servicing of external debt gulped $1.56bn. This was in a year when Federal Government revenue stood at N3.9tn.

The following year, 2021, the Federal Government spent N2.05tn on domestic debt servicing, according to data provided by the DMO. Servicing of external debt gulped $2.11bn the same year.

Also, the Federal Government reportedly paid an interest of N2.03tn from January 2020 to November 2021 on the Ways and Means Advances received from the CBN as well as N405.93bn for the period between January and April 2022.

It’s Not Compulsory For CBN To Provide You Dollars, Emefiele Tells Foreign…

Naira Will Suffer More Depreciation When Political Campaigns Begin Next…