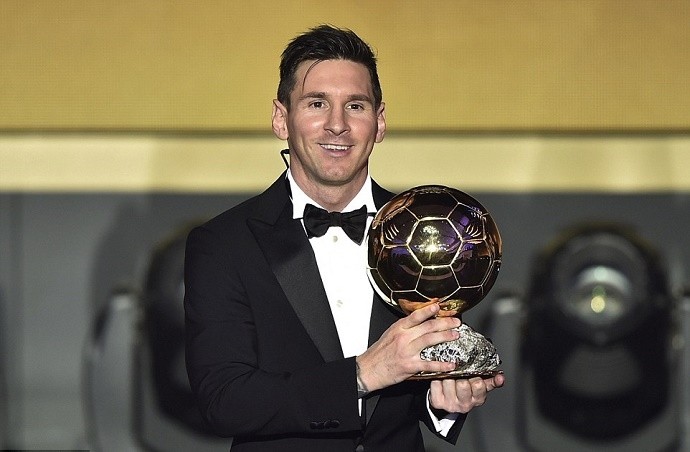 The 28-year old deposed eternal rival Cristiano Ronaldo, his Barca teammate Neymar at the show held at Zurich’s Kongresshaus, to take back his crown as the undisputed king of world football.

On receiving the award, the Barcelona talisman said: “It’s a very special moment to come back, to get a Ballon d’Or again after the two years in which Cristiano Ronaldo won each time.

“This Ballon d’Or means a lot more than I could have ever dreamed of as a child.

“It’s incredible that it’s my fifth, it’s much more than I ever dreamed of.”

His Barcelona boss Luis Enrique won the coach of the year award, after also guiding the Catalan’s to the treble last season.

Meanwhile US midfielder, Carli Lloyd has claimed her first ever FIFA Women’s World Player of the year award.

Lloyd scored 10 international goals during the calendar year as she earned the Golden Ball at the FIFA Women’s World Cup in Canada and finished second to rival Celia Sasic to the Golden Boot.

Brazilian Wendell Lira won the Puskas award for goal of the year for his spectacular overhead bicycle kick for Atletico Goianiense against Goaianesia in a regional league match, edging out Messi’s own mazy dribble against Atletic Bilbao in last season’s Copa Del Rey final.

United States coach Jill Ellis was named women’s football world coach of the year after leading her country to World Cup glory in the summer.

Barca and Real dominated the team of the year as well with four players each, including Messi, Neymar and Ronaldo.

The fair play award went to every football club and organisation supporting refugees.

Journalists, national team coaches and captains vote for their top three in all categories, apart from the Puskas and fair play ones.

The Puskas award, for the “most beautiful goal” of 2015, is voted for by users of the Fifa and France Football websites.
The winner is the person with the most points.

Sorry, But Buhari Is Not Fighting Corruption, By Ayo Sogunro

$300M Abacha Loot To Be Retutned To Nigeria By Switzerland – FG