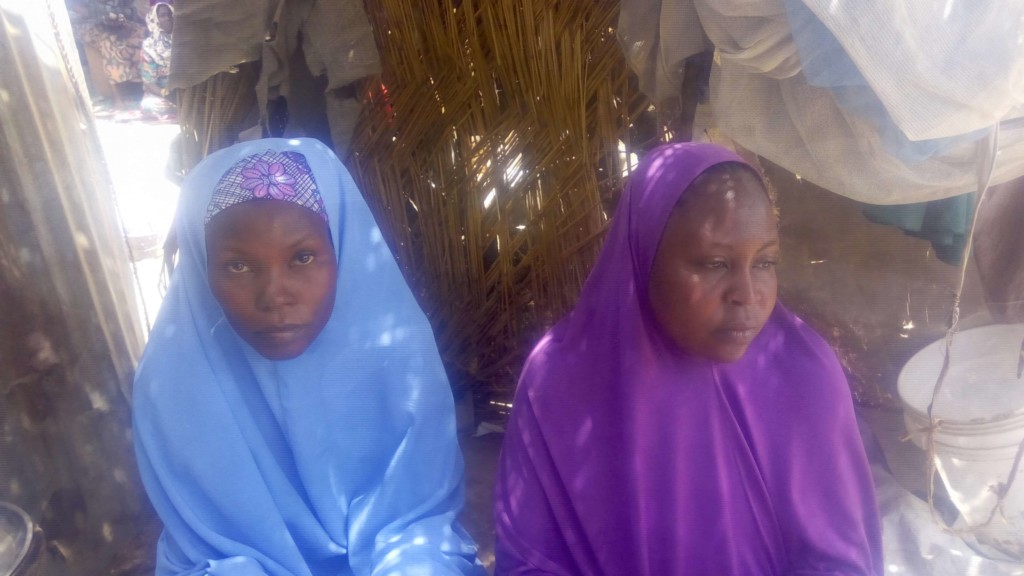 Just before sunset on a Tuesday in an Internally Displaced Persons (IDP) camp in the northeastern Nigeria town of Madinatu, near the commercial city of Maiduguri, Nana Abdullahi, an orphan, walked up to a group of women and children who had gathered to fetch water at a borehole in the camp, and began to educate them about human trafficking.

“Bad people come here often to deceive girls that they are going to give them jobs in big cities,” Nana said to the women and children. “If you listen to them and follow them, they’ll turn you into a slave.”

Nana knows exactly what she’s talking about. In 2015, when she was only 15 years of age, a man who met Nana and four other girls selling goods on the streets of Maiduguri offered to take them to the northwestern city of Kano where they were told they’ll be given jobs in shops. The girls left with the man, but later found out they were being taken to neighbouring Niger and not Kano as they were informed. When they arrived Niger, they were all taken to a lousy compound located in a slum — where girls brought in by the gang from outside the country are kept until the traffickers decide what to do with them.

“We were washing clothes, cleaning the compound, and doing many other hand work we asked to do in Niger,” Nana, who fled from Bama to Maiduguri when Boko Haram invaded in 2014, told me. “No one paid us for the work we did. We were only entitled to feeding.”

The girls remained in the compound until a month later, when they decided they had to leave. Unfamiliar faces had began to visit the home where they stayed. Each time they came, the girls were introduced to these persons by the people they worked for.

“We were afraid we could be sold to these persons and so we decided to escape from the house,” Nana said. “We had to beg for money on the streets to be able to pay our way back to where we came from.”

In Madinatu, where Nana lives, and in Bulumkutu, which is less than four kilometers away, at least a dozen girls have — in the last 18 months — narrated to me how they were approached by people who offered to take them abroad and give them jobs. In the same period, I interviewed seven other girls who explained how they were taken out of their camps to Niger and the Middle East by traffickers.

“Victims of human trafficking are of various ages, but girls under 18 are often the target of these traffickers,” Jibrin Bukkar, a social worker in Madinatu who independently counsels human trafficking survivors, told me. “Every woman or girl that has survived human trafficking and returned to her camp has regretted ever leaving in the first place.”

One of such ladies who regrets ever listening to persons she had little knowledge about is Maryam Muhammad, who lives in an IDP camp in Bulumkutu.

In 2011, Maryam, a devout Muslim, was taken to Saudi Arabia by persons who deceived her that they wanted her to take part in the lesser pilgrimage in Mecca. On getting there she was forced into involuntary domestic servitude. Her travel documents expired in during the time. Somehow, the police found out about her illegal stay in the country. She was then arrested and deported back to Nigeria in 2014.

“I had to work and payback the person who took me there,” Maryam told me. “I came back home with nothing.”

Maryam’s closest friend in camp, Ya Batu Bukar, does have a near similar story. She was taken to Niger over a year ago by persons who told her there was a job waiting in the country for her. When she got there, she found nothing. Her traffickers asked her to wait in a deadly slum for a while. She smelled danger and quickly escaped back home.

“I was afraid that they were going to force me into doing something I didn’t like,” Ya Batu told me. “Running away was the only option I had.”

Nana, Maryam, and Ya Batu have been living quietly in their camps since they returned home.

“We joined the campaign because we didn’t want other girls to pass through what we did,” Ya Batu said to a group of elderly women in Bulumkutu who asked her and her colleagues why they decided to become anti-human trafficking campaigners. “We are very happy that we can contribute to make Maiduguri a safe place for women and girls.”

The girls who survived human trafficking are, indeed, determined to protect their peers.

In May, a group of girls in Madinatu, who had encountered human traffickers while in camp, met and decided to team up to confront strangers who visited the camp. Whenever an unfamiliar face came visiting, they will — often in a polite way — ask about his or her purpose of visiting, and when not satisfied with the response they get, the girls will report to the boys in the local community vigilante group who are present or inform Up Against Trafficking which has an office close to the camp.

Once, girls chased away a group of women who visited the camp so late at night and began to interview children about their background. On another occasion, some girls confronted a lady who — for hours — was seen loitering the area children played in camp, and handed her to community vigilantes who ordered her out of the camp.

“We may not be able to stop traffickers from keeping their eyes on girls, but we can prevent them from taking girls away,” said Nana. “We want them to know that even though we are girls, we can fight.”