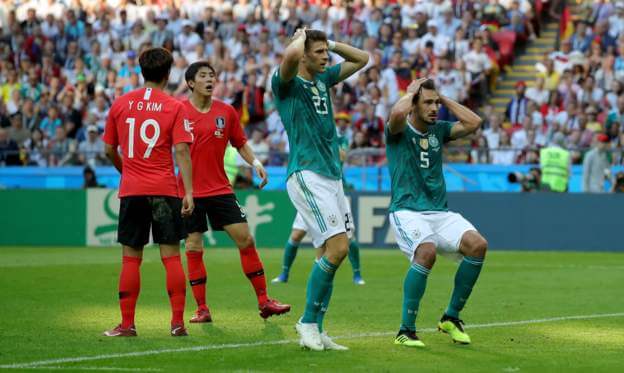 Defending champions Germany are out of the 2018 FIFA World Cup.

Joachim Low’s side were defeated by South Korea in their final Group E game at Kazan Arena, Kazan, Russia. It is the first time since 1938 they exit the group stage of a World Cup.

The Germans needed all three points to qualify to the round of 16 and despite having the majority of the possession, they failed to find the back of the net, finishing bottom of their group.

Trouble started for Germany when Kim Young-gwon found the back of the net in the 92nd-minute. The goal was awarded after a video assistant referee decision.

Then six minutes into stoppage time, with goalkeeper Manuel Neuer in the opponents’ half, Son Heung-min was left in space and tapped a long pass into an empty net to seal Germany’s fate.

It is the first time the defending champions will exit the group stage since 2002.

South Korea are also packing their bags but they go home having knocked out the defending champions.

I’m All Alone, My Appointees Not Doing Good To Me,’ Ortom Cries Out