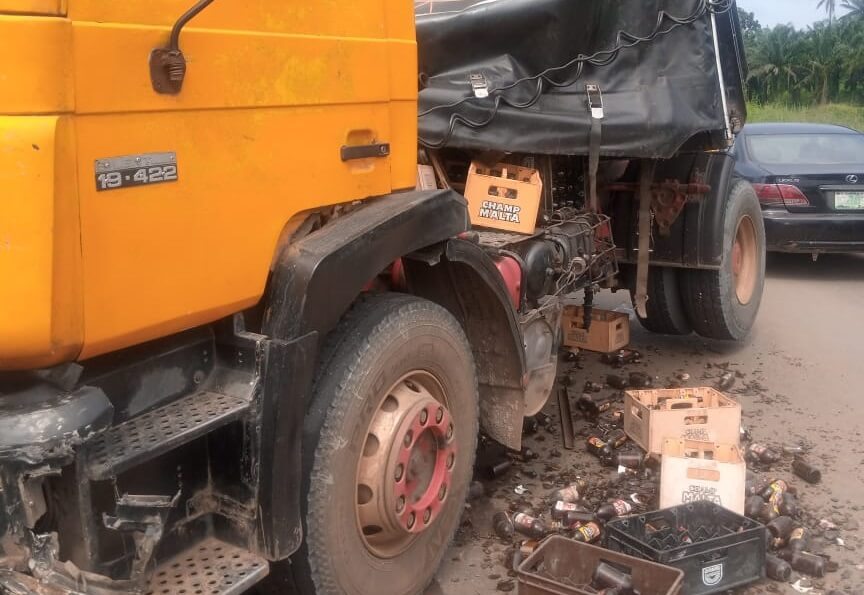 A multiple road crash involving about four vehicles has caused a gridlock along the Aba-Owerri expressway on Friday.

The collision happened around the Okpala junction in Ngor-Okpala Local Government Area of the state.

Our correspondent gathered that a truck had failed break and crashed into another truck conveying bottled malt drinks at a bridge near the junction.

One of the trucks fell into a ditch while the lorry it crashed into broke into two and blocked a part of the bridge. The crash also affected a bus and a Corolla car.

An official of the Federal Road Safety Corps (FRSC) who spoke to our correspondent at the scene attributed the crash to over speeding and poor maintenance of the trucks.

“This is what we have been battling since 5am that this accident occurred. It’s as a result of bad car maintenance and over speeding that made that particular truck to bash the other truck conveying bottled drinks,” said the FRSC official who didn’t want his named mentioned.

“Thankfully, no life was lost in this accident, but you can see the work on hand to clear up the bridge which is as at now almost blocked.”

Commuters moving from Aba to Owerri and vice-versa have to wait long hours to pass through a narrow passage on the bridge.

Commercial motorcycle riders are taking advantage of the opportunity, with some demanding double the amount of normal fare to move desperate passengers across the boundary between Abia and Imo States.

How NNPC Stabilized Price Of PMS For Nigerians With N864.07bn Subsidy