Special Reports
By Our Correspondent On Jan 26, 2022 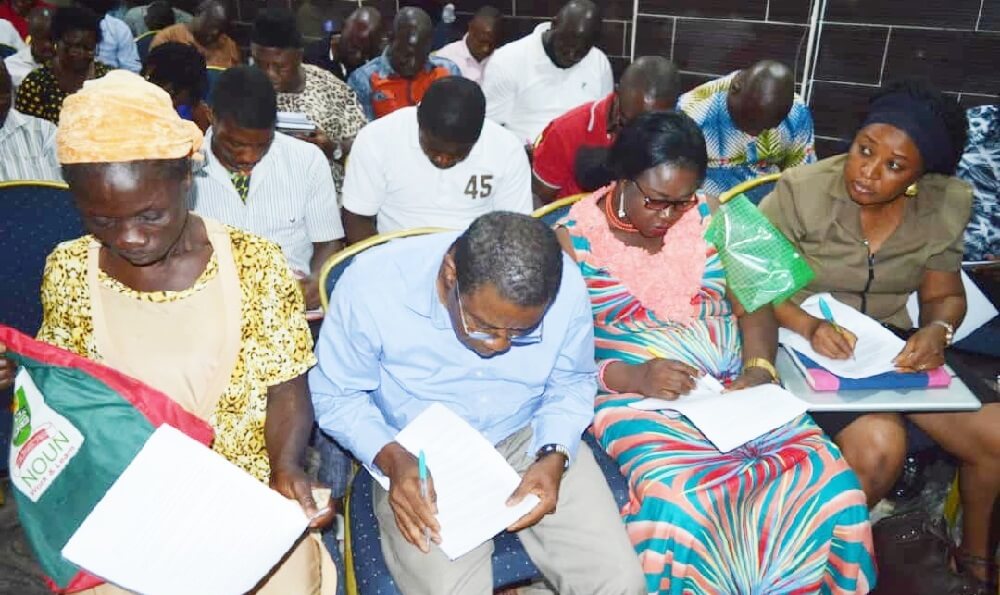 Sylvester Chinedu had hopes of starting a printing business in Enugu. His hopes were ignited in 2019 after his interaction with the erstwhile head of Enugu Small and Medium Enterprises, Anayo Agu.

Agu had told him that the SME centre had enough funds to disburse to qualified loan applicants.

“I was satisfied with Mr Agu’s explanations. I started the process of obtaining the credit facilities from the centre under the Agri-Business/Small and Medium Enterprises Investment Scheme aimed at promoting agricultural businesses and small/medium enterprises for sustainable economic development and employment generation,” Sylvester recounts his introduction into what would later become a fiasco.

Sylvester and more than 50 other small business owners who applied for the Federal Government loan through Enugu State SME centre have had their efforts and money gone down the drain after being qualified but were later told to reapply because they did not meet the requirements.

At the time, Sylvester said Agu assured that ‘money was not the problem’ because the Government of Enugu State had ‘settled its own counterpart funding, and that the Central Bank of Nigeria (CBN) had released its own funds’.

With such assurance, he and other applicants believed they could access the loan without hassle once they fulfilled all the requirements.

The Bait, The Processes

THE WHISTLER gathered that the processes involved registration of an enterprise at the Corporate Affairs Commission, writing a business proposal, undergoing a financial literacy programme of the centre, acquiring an office, appearing before the centre’s panel for screening and obtaining a tax identification number. Entrepreneurial managers of the respective zones would also visit applicants’ facilities for supervision. The applicants were made to produce their bank statements for three years, and swore an affidavit declaring commitment to the deal.

According to him, “I registered an enterprise at the sum of N15, 000 with the CAC. The business plan was technical, so a staffer of the centre did it for me, alongside others, at N5, 000 each. Each applicant paid N10, 000 for financial literacy training which lasted for 10 days. The money was paid to the centre’s private account. My zone was Enugu East, and we were about 56 in number. Similar exercises were done at other five centres across the state.

“After the training, we were issued certificates. We were then told to open an account where the loan would be disbursed. I used N5, 000.00 to open the account. I applied for a N10 million loan with a repayment period of seven years after one year moratorium. During the screening, we were told the amount would be slashed to either N6 million or N7 million. This implied that I had qualified.”

When Agu finished his tenure as the head of the centre in 2019, he was not returned and Arinze Chilo-Offiah was appointed in his place. Offiah, on assumption of office, brought in fresh workers, some of them said to be on contracts. The old ones were redeployed to state ministries and parastatals.

Trouble started after the new head and his new henchmen instructed that applicants have to repeat all the exercises they had carried out earlier to qualify for the loan.

In addition, they were to present e-copies of their bank statements. Sylvester said the online redoing of the plan attracted costs.

“The change didn’t dash our hopes,” he recounted. “We were assured that the money was not the problem. We were finally screened by the officials of NIRSAL Microfinance Bank, being the custodian of the funds. Afterwards, we were compelled to open another account with the bank. I opened it with N5, 000, and with joy because I was told I had scaled the huddle.

“We were also told to produce pro-forma invoices when it seemed that the loan was certain. The issuers of those invoices demanded some kick-backs and commissions even before the loan would be released. Finally, we swore to an affidavit at the High Court of Enugu State that we would participate faithfully in the scheme.”

Despite fulfilling all the requirements, Sylvester says he and other applicants waited for the first year without being paid the loan. But according to him, the authorities at the centre assured that their loan was at the last approval stage.

But on August 3, 2021, Sylvester received a message from NIRSAL MFB that his application was not granted.

“Dear Applicant, Kindly note that your loan application has been declined because your request does not meet our current Risk Acceptance Criteria. Thank you,” the email read.

“I made inquiries and found out that almost all the applicants got the same message. I was told that it was a CBN directive. My worry is: why the sudden change after we had been qualified? What about the money we spent?”

When Sylvester contacted the office of the Enugu SME Centre, he was told that those whose applications were granted were those whose request was N3 million and below. He was then asked to start all over again.

Peter Ifeanyi who, like Sylvester, is a victim of the alleged scam by the government agencies says he relocated from Abuja where he was based to Udenu, his home town where his proposed business is sited.

“I live in Abuja, and when I heard how the centre operated, I keyed into it. I personally met the former boss of the centre, and his explanation was clear. I was convinced that the credit facilities were ready for disbursement. I hurriedly followed the processes and got qualified, as I was told. I also relocated to Udenu where my proposed business was planned to be,” Peter said.

I was in the Udenu zone, and there were many of us, he added.

Convinced that the loan process was going to sail through, Peter acquired more land through individual loans because his proposed business was large scale plantain cultivation.

Leaving nothing to chance, Peter says he came from Abuja more than 10 times to process the credit facilities. “I had bought some equipment, and planned to construct a borehole for the business,” he said, but was devastated when he got a message that he had been disqualified after being qualified.

“I reasoned that there was deception,” he said, sensing that, “It was an economic fraud.

“If the former boss had been there, maybe it would not have been so. Or was a new set of applicants approved? Why ask us to pay such amounts of money under the pretext that my company had been qualified?”

THE WHISTLER inquiries revealed that Sylvester and Peter and over 50 others passed through these processes at the Enugu East Local Government Area unit alone. The state has 17 local government areas which are grouped into six zones. It was discovered that there were more applicants from the Nsukka zone of the state.

In all, each applicant paid N10, 000 to the coffers of the centre for the financial literacy training, paid at least N5, 000 to process a business plan within the centre; expended about N15, 000 to register a business name at the Corporate Affairs Commission, submitted their respective guarantors’ papers as collaterals and opened a corporate account with at least N5, 000 at a commercial bank for the scheme.

The applicants were later instructed to open another account with NIRSAL MFB, with at least N5, 000 to access the facilities. Some rented offices that they never used. For the Enugu East zone alone, each applicant spent about N40, 000, which amounted to N2, 240, 000 in total.

The head of Enugu SME Centre, Chilo-Offia, said applications such as that of Sylvester were rejected for reasons best known to the NIRSAL, though there were assurances that they would be given the loan.

Offia exonerated his office of any complicit, but applicants say Enugu SME Centre had lured them into this wild goose chase and believed they had been defrauded by the same agents that meant to help them.

“We only provide the training, which is mandatory to apply. NIRSAL reviewed his (Sylvester’s) application and rejected it for reasons known to them. He can apply again or go to their office to make inquiries,” Chilo-Offia said.

“NIRSAL makes all the decisions. Prequalified means that NIRSAL can review your application. They reviewed it and rejected it. I’ve given you their address to make enquiries. Or you can contact my predecessor. I’ve answered it here. The EDI provides the training. NIRSAL sets the price for all EDIs.”

A worker at NIRSAL MFB, who declined to be mentioned because she was not authorised to speak to the media, asked our reporter to channel his questions to the bank’s headquarters in Abuja.

“It is the directive of the CBN not to fund applicants whose loan is above N3 million,” a senior official of the bank confided in our reporter.

“Those who were disqualified are eligible to apply after six months. We encouraged the applicants to open accounts with us when we thought that CBN would approve their loan requests.

“Those that opened accounts with us can as well operate them as any other bank accounts.”

“If they demand such charges, I wouldn’t know. But the applicants can ask the providers to take them to other dealers to purchase the equipment. The right to disburse lies with the providers because the funds are paid to them directly.”

An applicant, who said he registered his company, Ugo Communications, revealed that the last time Nigerians were given a loan by the SME centre in Enugu State was in 2015.

“Truly, it was only in 2015 that Enugu SME Centre disbursed huge loans, running into millions of naira. Some even got N25 million. Since then, people have been applying, and fulfilling all the processes, but none ever got such again. The sums given as loans are usually small,” the unnamed applicant said.

“The amount being given is usually N1 million and below. Some are made to pay service providers some percentage before they can access their loans.

“As we are talking, enrolment is ongoing at the SME centre. It is usually all-year round. That is fraud because the applicants pay various unaccounted sums of money to undergo various exercises, and they won’t get the facilities they had anticipated, if at all.”

– This story was produced in partnership with Civic Media Lab under its Grass-roots News Project.

How We Discovered Rivers Aircraft Secretly Abandoned In Germany – Wike

Threatened By Erosion: Inside Stories Of Enugu Communities Lacking Government…