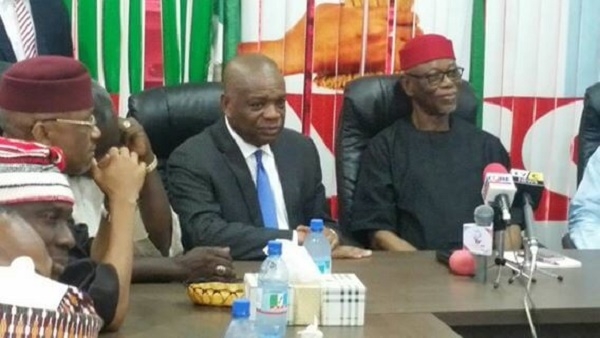 A former governor of Abia State, Orji Uzor Kalu, has reacted to claims that he dumped his party, the Progressive Peoples Alliance, PPA, to join the All Progressives Congress, APC, in order to escape probe by the President Muhammadu Buhari-led administration.

Responding to questions from reporters after he was received by the Chief John Odigie-Oyegun-led National Working Committee of the APC in Abuja on Wednesday, Kalu said he was joining the APC because of his family members.

“My family members are here (APC) and I am coming to join them,” he said.

He explained that his decision to join the party was largely due to pressures from his family, friends, political associates and other well-wishers who placed a premium on his political value.

“It is important to go along family lines in order to rebrand Nigeria. I am back to join where my family are.

“If I had joined earlier at the time they were forming government, it would look like I am trying to join them to form government.

“This is the right time for me to join because this is the middle time between now and the next season to do politics. I am joining now to be able to play raw politics,” he said.

He maintained that his decision would help convince his kinsmen especially in the South-East that “the APC is an all-inclusive party which has the growth and development of Nigeria as the reason for its existence.”

Corruption Is Vigorously Fighting Me Back, Buhari Laments