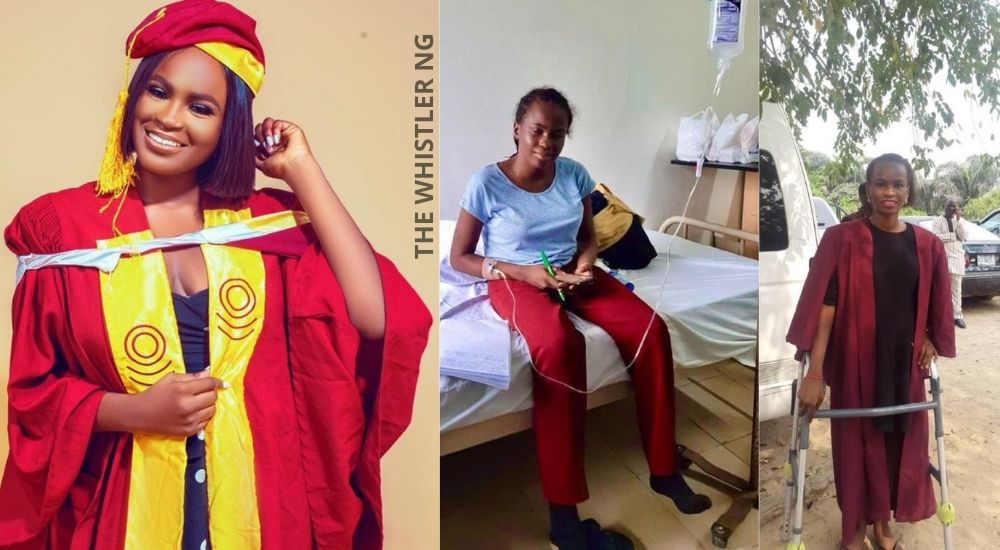 A first-class graduate of the University of Lagos (UNILAG) has recounted her experience battling Sickle Cell Anaemia while she was an undergraduate at the institution.

The graduate described how she was confined to a walking frame for a while and took most of her exams in the hospital.

The stress had made her change the course she was studying in her second year but through it all, she graduated with a first-class degree.

In a lengthy post on Twitter, @Joy_fro recalled entering into the university when she had a Sickle Cell complication known as Avascular Necrosis which caused her to rely on a walking frame to move on her own.

“I got admission into Unilag when I had a Sickle Cell complication- Avascular Necrosis of the hipbone. My doctors said I could never walk on my own until I have hip replacement surgery in both hips. Hence, they moved me from using crutches to using a walking frame.

“Throughout my 100level, I would walk to class and lab practicals with the walking frame, in pain and in shame. I couldn’t even take a cab because the frame was heavy and the cab men didn’t have the patience to wait for the process of folding it,” she said.

Joy described how the stress of getting around with the walking frame took a toll on her socially, mentally and physically. She said it brought her unwanted attention from other students who would sometimes offer her help or sometimes just stare openly.

She said at a point, the stress of pursuing her degree coupled with her health condition forced her to change her course of study to a less stressful one.

“It was a struggle. Battling with sickle cell and having to study in Unilag was an extreme sport. The constant stress had a huge effect on my health. It was so bad that I had to change my course of study in my second year to a less stressful one,” she recounted.

According to Joy, she had to spend a lot of time in the hospital due to Sickle Cell crisis to the point where the school’s medical centre became a second home to her. She recalled having to write most of her exams in the medical centre.

“I have been in and out of the hospitals so many times for sickle cell crisis. Unilag medical center was almost like my second home at some point. The pain just springs up from nowhere and there were times I had to be rushed at midnight from the hostel to the medical center.

“I remember writing my 100level exams on the hospital bed! Heck I wrote almost every exam at the hospital. Writing lab reports and doing my assignments there sometimes too. I made up my made up my mind to stop using crotches even if it will take me to limp and feel the pain,” she said.

She explained that she has some scars on her body as a result of allergic reactions to injections she received while in crisis as well as how she couldn’t go anywhere without at least two bottles of water, a jacket and a pair of socks.

“I am most grateful to almighty God for seeing me through my degree. It could only be him. In all of these, i graduated from the University of Lagos with a FIRST-CLASS DEGREE.

“I am thankful for a few of friends and most importantly, my mom and sisters, who constantly remind me to take care of myself, take my drugs, drink plenty of water, avoid stress and cold. Lol. People always wondered why I carried big handbags everywhere,” she concluded.

How NAPIMS Is Balancing Conflicting Interests Of Oil & Gas Stakeholders—Wunti