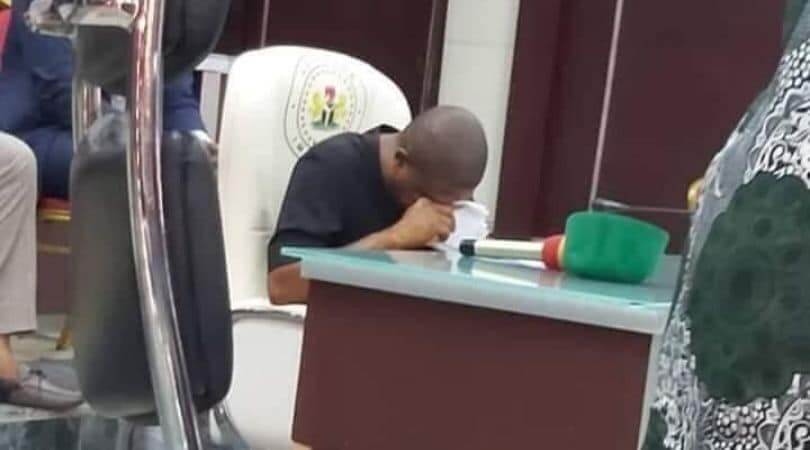 The media aide of former Imo state governor, Emeka Ihedioha, has reacted to viral photos on social media depicting his principal as weeping after he was sacked from office by the Supreme Court on Tuesday.

One of the photos being circulated on social media shows Ihedioha resting his head on a desk and weeping.

But AIC Akwarandu, who is Ihedioha’s aide on new media, clarified in a statement that the photos was not taken after the court judgement.

Akwarandu said contrary to the narrative, the photos were taken on December 20 2019 when Ihedioha received the body of his late commissioner for environment, Tony Okere, at the council chambers.

“The state had organized a reception to pay last respect to the commissioner at the executive chambers of Government House, Owerri,” he said.

“It is, therefore, wrong to assert that the picture was taken on the day of the Supreme court judgment,” Akwarandu added.

Meanwhile, THE WHISTLER earlier reported that Ihedioha had expressed shock at the overturning of his victory by the Supreme Court.

The former governor disagreed with the court’s judgement, saying: “The judgment did not reflect the wishes of the people as expressed on election day; it is unfair.”

Iran Says It Is Now Enriching Uranium Beyond ‘UN Limits’