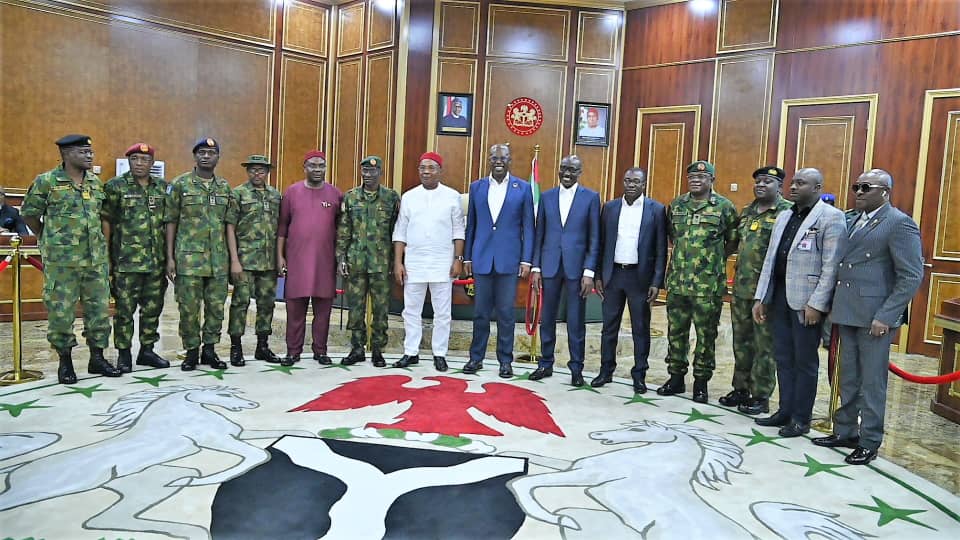 The Governor of Imo State, Hope Uzodimma has promised to support the efforts of the federal government, the Nigerian National Petroleum Company Ltd and that of security agencies in tackling the issue of crude oil theft and pipeline vandalism in Nigeria.

Uzodimma said this during a meeting with the Minister of State for Petroleum Resources, Timipre Sylva; the Chief of Defense Staff, General Lucky Irabor; the Group Chief Executive Officer of the NNPC Ltd, Mele Kyari and other top officials of government.

The delegation also visited Delta, Imo and Bayelsa states as part of moves to rally support for the fight against crude oil theft.

The meeting was held on Monday at the Government House New Executive Chamber, in Imo State.

The theft of crude oil has been frustrating the efforts of the government in attracting fresh investments into the oil and gas industry through the implementation of the Petroleum Industry Act.

Within a three months period covering January 1 and March 31 this year, Nigeria lost a whopping amount of $1bn revenue to crude oil theft.

Four months ago, the Minister of Petroleum Resources, Timipre Sylva the Chief of Defence Staff Lucky Irabo and Kyari, visited the Niger Delta for an on-the-spot assessment of the damage done by vandals.

These visits underscore the efforts of the government in finding a lasting solution to the issue of crude oil theft and pipeline vandalism.

Uzodimma told the delegation that his administration has declared war against oil bunkering and pipeline vandalism in the state.

He pointed out that his administration has also implemented policies and programs in partnership with the industry players and host communities to tackle the menace.

He said “I have always condemned the illegal bunkering of crude oil as it amounts to economic sabotage to the nation. As clearly stated by the Honorable Minister, over 400,000 barrels of crude oil are lost daily to theft. Imagine the quantity and quality of infrastructures that could be built with proceeds from such loss.

“My administration has implemented various policies, programs and partnerships with industry players and the oil producing communities for a peaceful and enabling environment for exploration.

“These inputs in the areas of support to the security agencies, infrastructural development for the communities and other basic amenities that make living more meaningful, have been productive.

“I commend the Federal Government under President Muhammadu Buhari on steps taken so far in safeguarding this national treasure and improving productivity for the good of the people. This has given rise to the commercialization of NNPC and it is expected to translate into more robust revenue generation and management for the nation.

“The efforts of the security agencies in ensuring conducive environment for operators and host communities can never be overemphasized and I am glad having the Chief of Defence Staff and his entourage on this mission. I beckoned on him for the adoption of non-force approach with the locals while reserving force for only criminals.

“I therefore, assure the Honourable Minister of State for Petroleum, the Chief of Defence Staff, the NNPC Limited and other industry stakeholders, of an unwavering support from the Government and good people of Imo State in the actualization of an economic viable society for all.”

Speaking earlier, Sylva said the delegation was in the state to get the support of the state government and host communities in the fight against crude theft and illegal oil bunkering.

“We have come here to engage the state government to get your buy in and support,” he added.

Sylva revealed that the issue of crude oil theft has now become a national emergency as the country is losing 400,000 barrels of crude oil per day and this has dropped production from 1.8 million to 1.4 million barrels per day.

The Minister commended the Governor on his efforts in curbing oil theft and securing oil facilities Imo State.

In his speech at the meeting, Irabor disclosed that under his leadership, security agencies would escalate actions to ensure that issues of oil theft and installations are stemmed.

JUST IN: NNPC, India Open Discussions On Distribution Of 20 Million Gas Cylinders To…

NNPC In Talks With US Finance Corporation, Others On Gas Project Funding