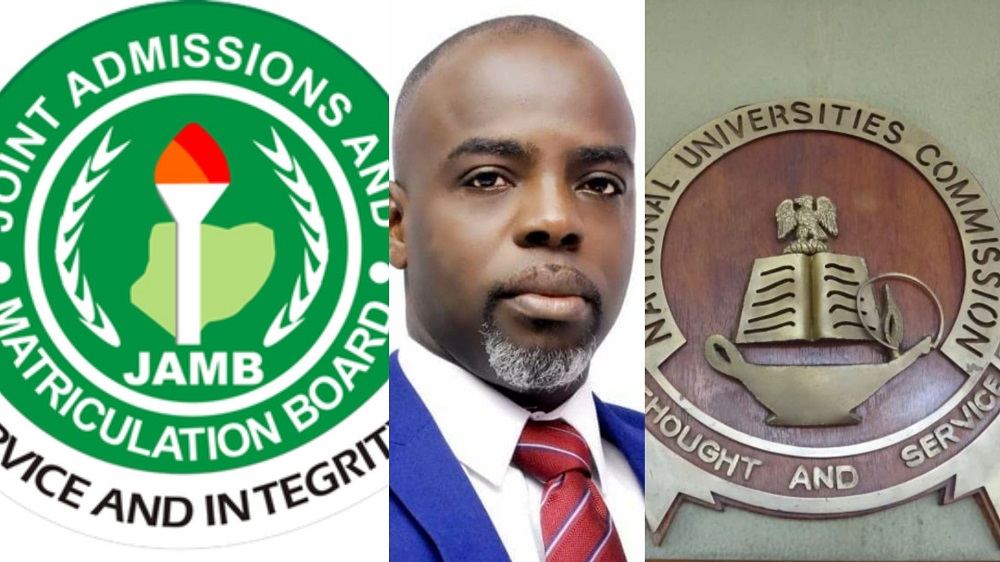 The first Vice President of the Nigerian Bar Association, John Aikpokpo Martins, has questioned the rationale behind reduction of cut-off marks for universities in the country, and accused universities of producing low quality law graduates who can’t pass Law School exam.

Martins is part of the management team of the outgoing NBA President Olumide Akpata.

In this interview with THE WHISTLER which held at the NBA National Secretariat in Abuja, Martins also  spoke on a number of issues facing the legal profession in Nigeria.

You are the First Vice President of the Nigerian Bar Association. What Does This Role Mean?

We (NBA) have three Vice Presidents, the first Vice is the very next in authority to the President and he is the Chief Adviser to the NBA President because such person must be a person of immense wisdom and idea.

We can also advise the NBA president on several issues. He ought to be the Chief supporter to the president at any given time so that the administration will turn out to be a success.

And particularly, in NBA, if you look at the other positions granted to the first Vice President. NBA is divided into three zones nationally– we have the northern zone, the eastern zone and the western zone. The three Vice presidents supervise different zones and for me, in this period, I’m the one supervising the Eastern zone which comprises of all the branches in the South-east and South-south with the exception of Edo and Delta.

Traditionally, the First VP is the Chairman of the Human Rights Committee of the NBA but in this dispensation, I was co-chair to Chief Mike Ozekhome SAN. So, these are chiefly his constitutional duties and expected duties.

You Graduated From The Nigeria Law School But Why The Massive Failure Rate In The 2021/2022 Bar Final Examinations?

First thing, the high rate of failure identifies two things. One, the failure of the institutions producing these students to the Law School. Two, it shows that many persons ought not to have even read law and that is why they are failing.

The failure is high because many persons who ought not to be there are there so when they meet higher standards, the system cannot easily be beaten, then you see the mass failure.

Let me give you an example, when I went into 100 level in 1985 in Bendel State University Ekpoma, we were about 60 and above that came in at 100 level, by the time we were in 200 level, Direct Entry, Change of Course, we were about 140 but about 70 of us graduated at the end of the day because it was pruned down.

And if I recall, when we returned to Law School, probably only two persons had a seat because the university has pruned down those who ought not to be there.

But now, look at JAMB score, 120, what is 120,200, or 220 going to do in Law School for God’s sake? My first JAMB I made 264 but I did not get admission into the university. The  other year, I got 272 then I got admission.You can see the standard at that time, when the standard is very high , by the time you get to the end product almost everybody will be passing.

But if money is one’s focal point and not passion, law on its own does not pay immediately except one’s father is a lawyer who is a rich man, then one gets disillusioned and the person starts doing things that are unethical.

The failure rate and poor standard is not from the Nigeria Law School, it’s from the universities.

The first question is who are you (universities) taking in? Why take candidates who did not make JAMB cut off mark? Why are you reducing the cut off mark? If it’s only four people that will enter the Faculty of Law in a year, let them enter. Law is a profession, it’s not an occupation.

If a university is given a quota, the Council for Legal Education should insist on that quota.

Almost everybody is now pushed to the university, and the university does not have capacity. Most of the private universities are interested in money, they are not interested in the product and the Law School starts sieving them so when people fail they start complaining.

The legal profession is facing bleak future, a lot of things needs to be done. We must or the Council for Legal Education must go back to the university and ensure that cut -off mark for reading law must be high.

I don’t see any person reading law who should not have 240 as the minimum cut-off mark.

What’s Your Assessment Of The Outgoing NBA President, Olumide Akpata?

I was with him, I was an integral part of his administration. A  lot of decisions taken, I was aware, some of my input were there. I will rate ourselves extremely very high because it’s just a two-year tenure.

Akpata is very erudite, he has a deep sense of fairness, he does not like injustice or bend the rules. All the decision we took were 98 percent guided by the rule of law, fairness and integrity.

The second one is that Akpata is extremely bold and courageous. Some of the decisions we took, I can say, many presidents cannot take it because of fear.

Achievements Of the Outgoing NBA President?

During our tenure, we did extremely well with the welfare of members.

When we came, we met debts, but we have cleared all the debts, at least for now, we have left N1.5b in the account.

On the general side of protecting the rights of the public, we have done extremely very well, there is no matter that came up that we have not handled. We have been speaking out, when we have to chastise or praise Government, we have done that.

Crises In Legal Profession Particularly Between NBA and Body Of Benchers, BoB?

I fear for the NBA, If NBA remains as one united NBA in the next ten years, it will be a miracle.

There are a lot of forces that wants to destroy the NBA. Those forces are not government forces, it is a fight within the profession.

Now, over the years, those who have lost NBA elections have not taken it lightly because when there is loss in an election, it’s a loss of power to some people.

When some people lose power, the only way they remain in visibility with some measure of power, is the Body of Benchers, BoB.

They can look back and throw stones at NBA because the association changes their leadership every two years, it’s not static.

Assuming we are going to be staying here for five years, I can tell you that some of the persons we could have taken on, we would bring them down by all means.

But we are not going to stay for five years, we won’t know what the next President is going to do.

So, they (BoB) members are there comfortably, they look at NBA with envy because they lost power in the association. When I say they lost power, I mean the people they are supporting did not win election. So, that recognition that comes to them is no longer there; they are trying to control the NBA.

Since they cannot control the NBA from within, they are trying to control it from the BoB.

The BoB is just a ceremonial body, Call to Bar , even the  Legal Practitioners Disciplinary Committee which is under it is just for disciplining of members. So, it doesn’t do anything, they are now trying to acquire more powers to see how they can now control the NBA because they have lost power in the association. There is going to be a logger head between NBA and BoB.

Also, the NBA has problems with the Attorney-General of the Federation and the way the association has been structured by law. It can hardly function maximally without the input or support of the AGF.

So, if the AGF is not happy with the NBA, there is a lot of problem, it will stop us from doing a lot of things that needs to be done.

Now, the AGF has a problem with the NBA, what did he do? He amended the rules of Professional Conduct unlawfully but we are in court, we didn’t want to go to court but he refused to dialogue with us. That is a problem from the AGF.

So, you can imagine, AGF, Supreme Court Registrar, BoB is fighting the NBA. We have pockets of religious and tribal sentiments all rearing their heads within the NBA.

We have the so-called New Nigeria Bar Association, don’t think it has died down, some day it will revive.

These are the forces within the NBA (they are all lawyers and legal organs) fighting the NBA.

So, if NBA survives the next ten years, we have to thank God.

If Akpata had not been president at this time, the NBA would have long been dead and let me tell you why?

The Legal Practitioners Act is under review now, it was already agreed upon before we were elected and Akpata looked at it and said there are some portions of the Act that the NBA will not agree to.

One of the worst aspects of that law is a reference to the NBA. That law says NBA means other associations that may be registered. If you look at the Constitution, NBA has some members that must be sent to the NJC, and all statutory bodies, that is the power of the NBA.

Now, if the Practitioners law now says NBA is any other group, if that thing had gone through, it simply means that the people in the BoB who were engineering it will simply wake up one day and say NBA is not the only association recognized by law and they will be correct. That is why we stopped it from been passed.

What is NBA doing that ought not to be done? We have to make the NBA more inclusive, not necessarily because it’s not inclusive but some people feel they are not included. Every successive administration should make everybody feel that they are members of the NBA, without breaching the constitution.

Peter Obi Slams States For Not Investing Over N1.5trn Bailout Fund From FG