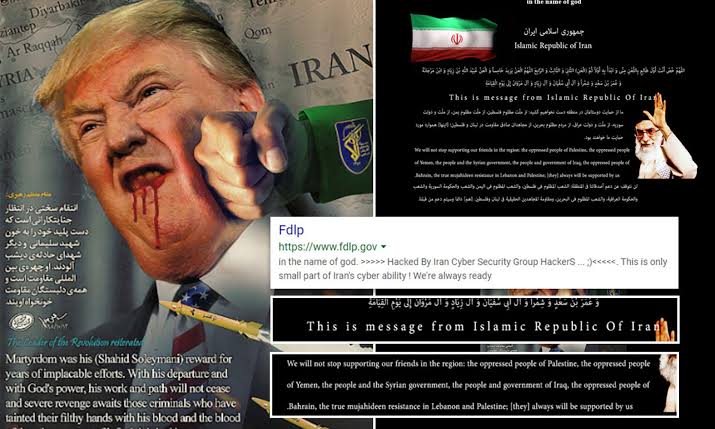 A website of an agency of the  United States government has been breached by hackers claiming to be from Iran.

The guardian UK reported that the website of the Federal Depository Library Program was replaced with a page titled “Iranian Hackers!”

The FDLP is a government program created to make U.S. federal government publications available to the public at no cost.

Replaced contents of the page  displayed photos of Iran’s supreme leader, Ayatollah Ali Khamenei as well as the Iranian flag.

The message of the content on the breached site stressed that the group would retaliate the killing of Iran’s top military leader,Qassem Suleimani by US airstrikes.

“Martyrdom was (Suleimani’s)… reward for years of implacable efforts,” read a graphic design portraying US president Donald Trump receiving a punch by a fist emanating from Iran as missiles fly by.

“With his departure and with God’s power, his work and path will not cease and severe revenge awaits those criminals who have tainted their filthy hands with his blood and blood of the other martyrs.

“This is only small part of Iran’s cyber ability!”the post reads.

Donald Trump had warned that the White house is keeping eyes on  52 sites in Iran and will hit them “very fast and very hard” if Iran acts out its threat.

Meanwhile, a senior administration official of the US Department of Homeland Security says it is following developments regarding the apparent hack of the government website.

Trump To Iran: We Just Spent $2trn On Weapons, U.S Military ‘Biggest, Best In the World’