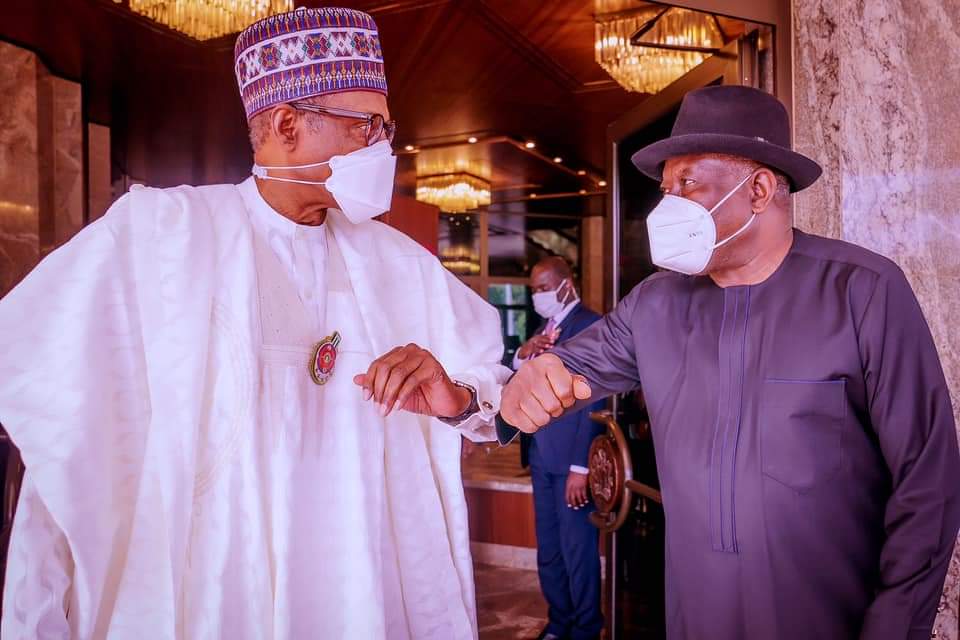 Buhari met Jonathan behind closed-doors on Thursday evening. It was the ex-president’s second visit to the State House in two months.

Femi Adesina, Buhari’s senior media adviser, shared photos of Jonathan’s visit on Facebook but was silent on the agenda of his meeting with the president.

THE WHISTLER understands that the former president did not speak to journalists after the meeting, as has been the tradition during his previous visits.

However, the ex-president’s position as the ECOWAS Special Envoy to Mali had brought him in regular contact with Buhari.

Governor Ikpeazu explained after the meeting that his visit to Buhari was to discuss his plans to industrialise Abia State with the president.

The governor, who has barely 14 months left in office, said he briefed the president on “developments on the Enyimba Economic City project and inform him of the next level plans for the mega project.”

A statement issued by Ikpeazu’s Chief Press Secretary, Onyebuchi Ememanka, said the governor “thanked the President for the support given by the Federal Government to the project, particularly the 20 per cent stake taken up by the Federal Government in the project and the consistent approvals given by relevant Federal authorities to important applications made on behalf of the project after fulfilling all legal and other relevant requirements.

“The President was further informed that all the international financial institutions involved in the project, from the World Bank, the International Finance Corporation, the African Development Bank to the Afrexim Bank, had fulfilled their obligations to the project.

“With this development, all investors in the project are expected to crystallise their investments while the formal ground-breaking of the Enyimba Economic City project is expected to be performed by the President between the end of the first quarter and beginning of the second quarter of 2022.

“The President expressed satisfaction with the developments and renewed the commitment of the Federal Government to the project.”

Governor Ikpeazu had been rumoured to be making plans to dump the Peoples Democratic Party (PDP) for the ruling All Progressives Congress (APC).

APC Performance Claim Is Joke Of The Year, Says PDP