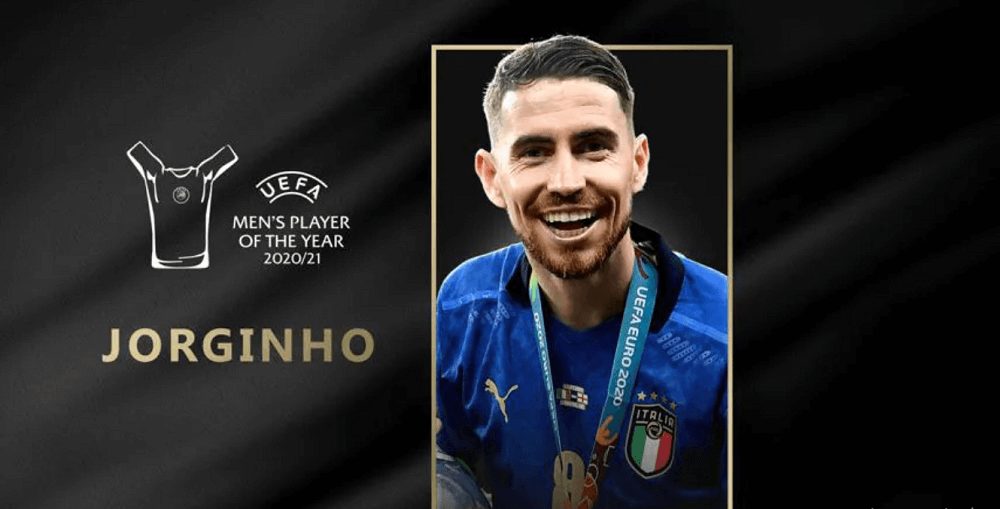 Chelsea’s Jorginho has become the first ever player in the London club to win the UEFA Player of the Year Award in the men’s category.

This was based on the outcome of the event held in Istanbul on Thursday.

The Italian striker was pivotal in Chelsea’s UEFA Champions League win and at the 2020 edition of the UEFA EURO competition.

Jorginho, Manchester City FC and Belgium midfielder Kevin De Bruyne and his team mate N’ Golo Kante were selected among the top three, but he secured the most votes from the eligible voters.

UEFA said, “Chelsea FC midfielder Jorginho has been crowned UEFA Men’s Player of the Year 2020/21. The announcement was made at today’s 2021/22 UEFA Champions League group stage draw, held at the Haliç Congress Center in Istanbul, Turkey.

“The Italian striker was a pillar in his club’s victorious UEFA Champions League campaign last season, and arguably one of the most important players in Italy’s UEFA EURO 2020 winning team.”

According to the football body, Jorginho secured a total of 175 points, De Bruyne (167 points) and Chelsea FC and French international Kanté (160 points).

The organisers said, the jury was composed of the 24 coaches of the national teams that participated in UEFA EURO 2020 this summer, together with the 80 coaches of the clubs that played the group stages of the 2020/21 UEFA Champions League and UEFA Europa League.

Fifty-five journalists, one from each of UEFA’s 55 member associations, selected by the European Sports Media (ESM) group, were also part of the jury, according to UEFA.

Jorginho said, ” I’m very sorry I can’t be there at this important moment, due to the restrictions that we all know about. I can’t be there, but I wanted to say that I’m very happy with this award.

“I would like to say thank you to all the people who made their contribution to making this happen.

“A big thanks from the heart to all the people who helped me on this route, to my family, to my friends, to the supporters, to my team-mates, to the coaches. I’m very happy. A hug to everybody.”

At the same event, Alexia Putellas of FC Barcelona was named UEFA Women’s Player of the Year 2020/21.

JUST IN: How NNPC Made N287bn Profit For Nigerians Despite Covid-19– Kyari

Where I Diasagreed With Aregbesola— Gov Oyetola