JUST IN: Enugu Bishop Bars All Catholics From Attending Mbaka’s Church Over Attack On Peter Obi 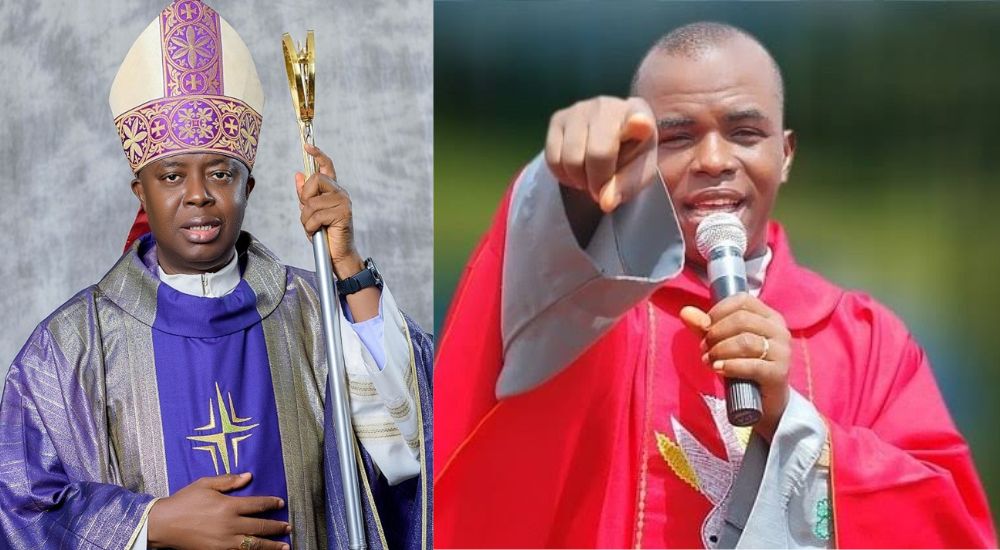 The Catholic Bishop of Enugu, Callistus Onaga, has meted out stiff punishment to Father Ejike Mbaka of the Adoration Ministry Enugu by alienating him from catholics in the state over his recent attack on Mr Peter Obi, the Labour Party presidential candidate.

Onaga, in a letter dated June 17, barred all Catholics, including clergies, from attending “all religious and liturgical activities” of Mbaka’s Adoration Ministry.

The bishop took the punitive measure against Mbaka despite a lengthy statement earlier released by the controversial reverend, where he apologized to Obi for calling him a ‘stingy’ and ‘wicked young man’.

Mbaka had while delivering a sermon on Wednesday said that God will never allow Obi to govern the country over his alleged refusal to donate money to his church.

But following the backlash that trailed his comments, the reverend reversed himself and asked Obi and his supporters for forgiveness, saying he didn’t intend to malign Obi’s “good reputation”.

However, Bishop Onaga, who had earlier issued a statement distancing the Enugu Catholic Diocese from Mbaka’s comments, approved the punishment over the priest’s alleged persistent violation of “several fraternal corrections and admonitions” of the Diocese.

The Bishop’s letter partly reads, “In the light of the happenings in the Catholic Adoration Ministry Chaplaincy Enugu: capable of undermining the Catholic faith and teachings; and after several fraternal corrections and admonitions to Fr. Camillus Ejikc Mbaka, the Chaplain of the Ministry: and after having given him pastoral directives and guidelines for the Ministry Chaplaincy, which he persistently violated; and in fulfilment of my pastoral duties as the Chief Shepherd with the obligation to promote and safeguard the Catholic faith and morals in Enugu Diocese, I hereby prohibit all Catholics (clergy, religious and lay faithful) hencetitrth from attending religious and liturgical activities of the Catholic Adoration Ministry until the due canonical process initiated by the Diocese is concluded.

“My decision is basal on the fact that some of the teachings and utterances of Fr. Camillus Ejike Mbaka at the Catholic Adoration Ministry are not consistent with the teachings and faith of the Catholic Church. I enjoin all the Christian Faithful to keep praying for Fr. Mbaka and the Catholic Diocese of Enugu as I entrust him and the Diocese to the maternal care and protection of the Blessed Virgin Mary. Queen of the Apostles.”